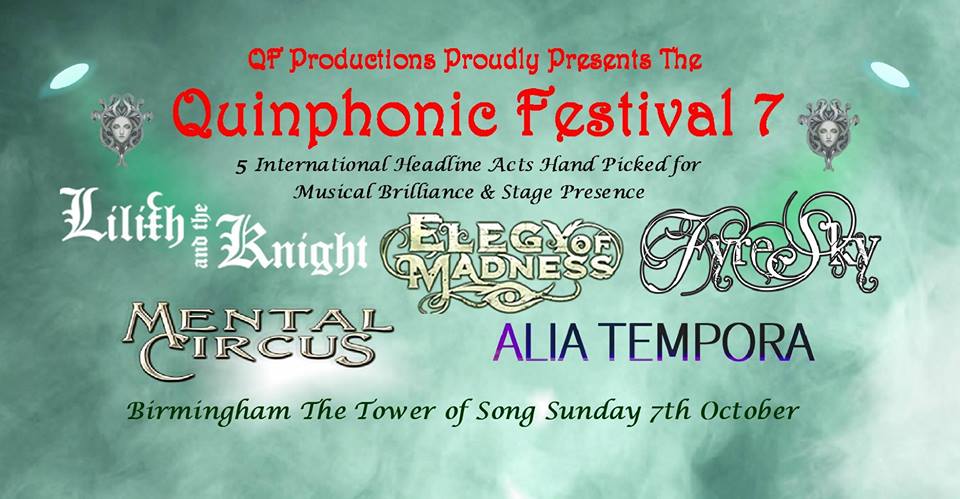 The Quinphonic Festival is an Independent, Self Funded event born of a concept conceived by three friends who have supported the Female Inclusive Metal / Rock scene for many years. The idea was to create a festival featuring acts from the UK and Europe in which the five bands taking part, hence the ‘Quinphonic’, would all have equal billing, all play a full one hour set and be paid an equal share of all the profits made from ticket sales.

The Quinphonic Festivals are  put on  by Black Phoenix Metal Forum, and hosted by its creator Ian Black, and features Rock/ Metal/ Goth  bands that have either a female Vocalist or female  dominated and are held twice a year, since April 2015

The First Quinphonic Festivals were held at The Roadhouse venue in Stirchley, in  Nr Birmingham , until its sudden closer two years ago, which led the organiser having
to find another suitable venue to put the Festivals on at.
Sadly i have not been to any of the previous  Quinphonic Festivals, but, i wasn’t going to miss this one!
We arrived at the new Venue ‘The Tower Of Song‘ Birmingham, early, as not to miss any of the bands arrival, to meet the organisers and collect passes and have a chat.
There were already a few early  arrivals, eagerly waiting to catch a glimpse of their favourite band , unloading their stage equipment.
The Tower of Song venue is  situated in South Birmingham, is small, but certainly packed a punch sound wise, and decorated out with paintings of music legends on the walls.
Waiting patiently for the main doors to open at 3pm, when press were allowed in and there was already  an audience were waiting  outside like hounds baying,
The First band to perform, FYRESKY from Southend-on-Sea, took to the stage for their sound check, and right there and then, I knew this was going to be a hell of a set!
Gabriel Valentine (Vocalist) (and yes you are right to be thinking this isn’t a female vocalist), had already started belting out the high notes, like a screaming Siren!
The Doors opened to the public at 3.30pm, and people started flooding into the venue.
Fyresky, took to the stage. I have been playing this band on my radio show for a while, and knew they were good, but good god, this band Live are Amazing!
Kris White ( Bass), (A female bass apparently qualified the band for a slot at the festival) and i loved the neon multi-coloured Bass strings. Absolutely blinding set from this band.
The Second band on the line-up were Mental Circus from Belgium. There wasn’t enough room to move to the front of the stage for this band, as many of the male members of the audience, had beat me to it, bringing with them an abundance of fluffy toy Unicorns.
Sanne  Marico, ( Vocalist ), along with huge blue wings, with lights on them, looked truly magical, and i suspect caught the eye of every hot blooded male there, and again another fantastic set from the band. After interviewing a couple of the bands, that i had managed to get hold of, amidst their adoring fans, eager for autographs and photos taken with them, I headed back inside the venue to watch London Hard Rock band LILITH AND THE KNIGHT. WOW this lady can sing! This was my second time seeing the band  and again they didn’t disappoint.
Excellent music from her backing band.
ELEGY OF MADNESS – A Symphonic Metal from Italy. and, ALIA TEMPORA –  A Rock/ Metal band from Czech Republic. Both put on Fabulous sets, later on in the evening to, a by then. mesmerised audience, DID I MENTION THE UNICORNS? (They seemed to be growing more and more as the evening progressed), Even the bands had them on stage with them during their sets!
I was proud to have been invited to cover this festival by Ian Black ( Black Phoenix Rock and Metal Forum ), and reminds me just WHY i love this genre of music so much, and also what The Ladies of Rock and Metal are achieving  in this World of Predominantly led Male bands
The Quinphonic Festivals continue to be becoming a resounding success.
I can’t wait for The Quinphonic 8 Festival, which takes place at The Tower Of Song on Sunday 21st April 2019 (Easter Day ),
Advance tickets for The Quinphonic Festival 8 are available via ‘guest list’ priced at £15 each (to add your name to the ‘guest list’ please pm The Quinphonic Festival facebook page at  www.facebook.com/quinphonicfest stating how many tickets you require, max of two per person) Any remaining tickets will be priced @ £20 each on the door on the day.
The line- up for Q8 has  just been announced, It just goes to show you, that you don’t need a massive well know venue for a Festival such as this one to be a great success as this one has become. by a  very well organised  and devoted team.
Quinphonic 7 Festival
The Quinphonic Festivals (buy Tickets here)
Black Phoenix Rising Rock and Metal Forum
Quinphonic 8
Ian Black
FyreSky
Mental Circus
Lilith and The Knight
Elegy Of Madness
Alia Tempora
Black Phoenix Rising Rock and Metal Forum