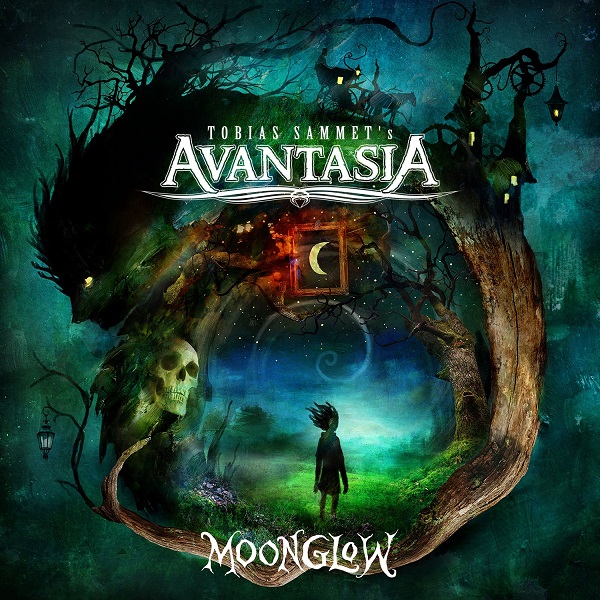 A new album from Tobias Sammet is a cause for great excitement, particularly since the stunning return to form that began with 2014’s Space Police that cast off the minor lull that encompassed the four studio albums released between 2010 and 2013. Sailing in the wind created by two (and a half) albums worth of incredible material, things were certainly looking promising with Moonglow on the horizon.

However, early signs were not good when the “The Raven Child” dropped shortly before the new year. The eleven minute single suffers in much the same way as “The Great Mystery” did six years ago, with a few great segments (that chorus hook is delectable, and the way those Gregorian chants bleed into that layered vocal passage is immense) interspersed with momentum killing mediocrity. It tries hard to walk the same path as the title track from The Scarecrow, right down to the quasi folky feel and the sudden speedy, Jorn dominated coda, but it doesn’t come close to the monumental 2008 classic. Hansi Kürsch, a long-time dream guest for many Avantasia fans, does little to inspire, and therein lies one of the biggest problems with Moonglow: there are few standout performers. That’s quite a flaw considering the calibre of vocalists on the record, and if the mighty bellow of Jorn Lande can’t breathe life into proceedings, then chances are there’s an issue with the songwriting. Despite some decent hooks in the likes of “Book of Shallows”, “Alchemy” and “Piper at the Gates of Dawn”, they still feel like tired, well-worn retreads, whilst “Starlight” is a complete throwaway; a real rarity in the Sammet canon. “Ghost in the Moon” channels Tobi’s inner Steinman, but ends up being a stuttering, bloated misstep rather than an epic drenched in pomp and grandeur. For all the novelty of cover tune “Maniac”, it’s at least well written, making some of the compositional shortcomings here all the more glaring.

The production is a source of both delight and frustration. It creates a lavish, lush soundscape that is incredibly evocative, tying perfectly into the aura the album and artwork is trying to create. As a presentation and package, I can’t really fault it. In fact, I can’t really find fault with Sascha Paeth’s production either. It’s just the fact that it sounds like pretty much everything else Sammet has released since 2006 (give or take a few minor tweaks). This doesn’t affect the sound quality, but it robs the albums of individuality and character when the sound is so homogenised. This is in stark contrast to Sammet’s early career works, which all sound unique. I know that Paeth is a vital collaborator for Tobi, and he has drawn some wonderful creativity from him since they started working together, but I feel a change of producer – as unlikely as it is to happen – would be beneficial in the future. Paeth doesn’t do the music any favours with his lead work either, which is competent but bland beyond comprehension. From what I can recall, there are no guest instrumentalists on the record, and it’s crying out for the sort of guitar work the likes of Bruce Kulick, Timo Tolkki and Henjo Richter (amongst others) brought to the fold in years gone by.

It’s not all doom and gloom of course, as Tobi is far too good to have a bona fide dud. The title track is a superb rock duet with Candice Night, whose vocal is simply enchanting, whilst “Lavender” brings the sort upbeat, buoyant joy you’d expect when Bob Catley steps into the vocal booth. Mille Petrozza’s brief turn in “Book of Shallows” is dripping with venom (although it merely highlights the fact that I’d be better off listening to Kreator instead), and ballad “Invincible” sees Sammet and Geoff Tate effectively strike an emotional chord. Predictably, Kiske absolutely kills it on power metal anthem “Requiem for a Dream”, proving that he is perhaps Tobi’s most dependable (and indispensable) sidekick in the land of Avantasia.

It is always disappointing when one of your favourite artists releases something that isn’t quite what you were hoping for. Sadly, this is the case with Moonglow. It is a fairly good album, but I have lofty expectations when it comes to Tobias Sammet, given the quality of his output over the past 25 years. There will be plenty of fans out there who will enjoy this, and I can understand why. Unfortunately, it’s not clicking me, and for the first time since I became a fan 15 years ago, I feel no urge to revisit an album after the first few customary spins. Perhaps it will improve over time, but for now, in my eyes, this will go down as the weakest album of Sammet’s largely exemplary career thus far.

Find out more on Avantasia here:

Moonglow is available on February 15th via Nuclear Blast Records, and can be purchased here.