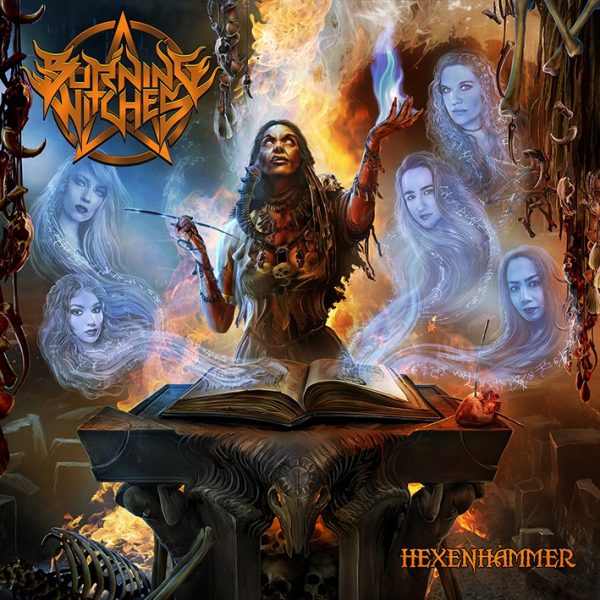 When thinking of Switzerland, things like banks, neutrality and mountainous scenery tend to spring to mind long before heavy metal music. Five musicians from the town of Brugg aim to change that with the all-female, old-school metal onslaught that is their band, Burning Witches. Hexenhammer is taken from the German name for the Malleus Maleficarum, a fifteenth century treatise on witchcraft and, more pointedly, the proposed extermination of all witches. You may sense the beginnings of a theme here…

After a brief and haunting introduction, opening song Executed ramps all dials straight to eleven with fast paced riffing, shredding lead guitar and a chorus that is begging for a live crowd to chant along. Seraina Telli delivers a vocal performance that, were this medieval times, would probably have her being branded as a witch herself. Whether it is through her snarling mid-range or powerful highs, her voice has a bite to it that adds a joyfully menacing quality to every line. No more so than in the theatrically over-the-top Maneater. Don’t let any euphemistic connotations fool you: this track is pure cannibalistic filth. The slow and eerie guitar line coupled with Telli’s shrieks and cackling makes for a tune that should grace every Halloween playlist from now until the end of time. Her cleaner and more melodic approach shines through on tracks such as Open Your Mind and the acoustic Don’t Cry My Tears. If, as a hardened metalhead, you question the presence of an acoustic track on an otherwise uninterrupted stream of heavy hitting tracks then remember, even witches have a tender side!

Not to be outshone, the rest of the band, particularly guitarists Romana Kalkuhl and Sonia Nusselder, deliver a raw and precise lesson in traditional metal song writing that sounds like years of absorbing every trick Judas Priest and Iced Earth have to offer and cramming it all into one album. The songs go from the thrash of Executed to the marching gallop of Maidens of Steel to the mid-tempo pounding of the title track and everywhere in between. This creates a varied yet focused album that, coupled with the lyrical themes, would make even Ronnie James Dio himself proud. Speaking of whom, the album is wrapped up with a very serviceable, if unadventurous, cover of Holy Diver, highlighting another classic influence that Burning Witches proudly draw on. It says a lot when most of your album can be played alongside a classic Dio track and not sound inferior.

Burning Witches really missed a trick (or treat?) by not releasing Hexenhammer in time for Halloween. The creepy melodies and lyrics conjure up images of midnight rituals and brutal happenings of a bygone age, with the odd bit of thunder, rain, tolling bells and screaming victims thrown in for good measure. The groups influences are obvious, and comparisons to most classic metal bands (Judas Priest, Dio, Doro, Iron Maiden etc) can be drawn from various parts of the album, but the group have taken a sound, added their theme and made it their own. The interplay between pleasing melodies and a darker, more sinister sound clearly pays homage to all their heroes, while not sounding exactly like any of them. If old-school metal with plenty of bite sounds like your thing then Hexenhammer deserves your attention. Bring on the witching hour.

Hexenhammer is released on 9th November 2018 via Nuclear Blast Records and can be purchased here.