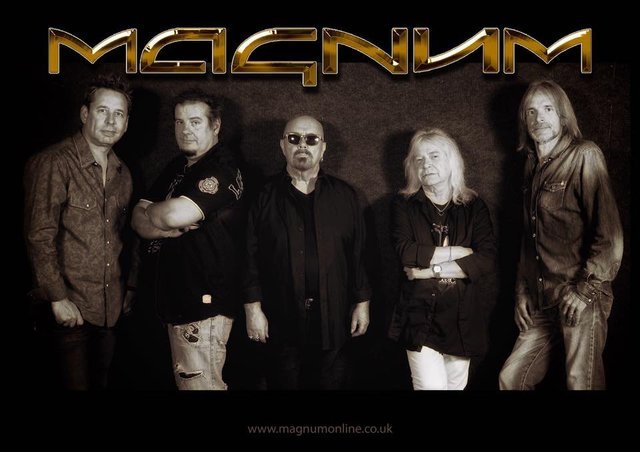 ‘Lost On The Road To Eternity’, which marks the major 20th studio album milestone on this illustrious group’s 40 year musical path, is one of Magnum’s most inspired, diverse, exhilarating and alluring albums ever. Reflecting on the reason for this new creative zenith, guitarist / songwriter Tony Clarkin recalls “As I had started to write the songs even before we embarked on our most recent tour, I subsequently had time to let my initial ideas sink in for a few weeks, which helped me realise that I was on the right path,” he says, looking back with satisfaction. “That was a good feeling which inspired me to write more powerful numbers. Apart from that, the usual Magnum formula applied: I go to the studio, try out ideas on the guitar or on the keyboards and do my damnedest to write the best Magnum song of all time.” As a result, ‘Lost On The Road To Eternity’ contains eleven of arguably the best Magnum songs of all time, all additionally sparkling with the fresh inspiration brought to the table by consummate new band members Rick Benton (keyboards) and Lee Morris (drums).

‘Without Love’, the first single, a strident, relentlessly driving groove-laden song with a subtly irresistible melody, glorious guitar riffs and catchy chorus, will totally tantalize the fans’ musical appetite when released on December 8th. After their headline appearance at the Giants Of Rock Festival in Minehead on January 26th 2018, Magnum will set off on a two month European headline tour in February, commencing with the following UK concerts:-

The album’s mighty title track features a duet between vocalist Bob Catley and Tobias Sammet, a kind of artistic thank-you by the Edguy / Avantasia front man in appreciation of Catley’s guest stint on various of Sammet’s releases. ‘Lost On The Road To Eternity’ was also additionally enhanced by atmospheric arrangements courtesy of the Wolf Kerschek orchestra.

While much kudos must be attributed to original band members Tony Clarkin and Bob Catley for most of the musical prowess on ‘Lost On The Road To Eternity’, a fair amount should be attributed to bassist Al Barrow, (who has been in the group since 2001), along with new keyboardist Rick Benton and drummer Lee Morris. Benton joined the Magnum camp in December 2016 to replace long-standing member Mark Stanway, while Morris took over from Harry James in the summer.

“Harry has two other bands, Thunder and Snakecharmer, and it became more and more difficult to coordinate our schedules,” Clarkin explains and confesses; “I must admit that I was reluctant to let him go, but after Lee had drummed for us for the first time and we realised that he adds even more rhythmic complexity to our songs, I’m more than happy with the line-up change.”

Clarkin feels just as positive about his new keyboardist Rick Benton; “Rick has brought a breath of fresh air and interesting ideas into the band. His style is carefully considered and he seems to know intuitively what enhances our material. You just have to give him a rough idea of the arrangement and he immediately comes up with a perfect solution. All you have to do is listen to and enjoy the atmospheric middle part of ‘Welcome To The Cosmic Cabaret’ to appreciate what a positive addition Benton is to the Magnum fold.”

The digipack CD version of ‘Lost On The Road To Eternity’ will include a bonus live Cd containing 4 songs recorded at Magnum’s 2017 performance at the Leyendas Del Rock Festival in Alicante, Spain.

‘Lost On The Road To Eternity’, the follow-up to 2016’s ‘Sacred Blood “Divine” Lies’, looks set to chart even higher than it’s highly acclaimed predecessor, which crashed in to the UK Top 40 at 31 on release in March last year.

MAGNUM Lost On The Road To Eternity

|
lost on the road, magnum