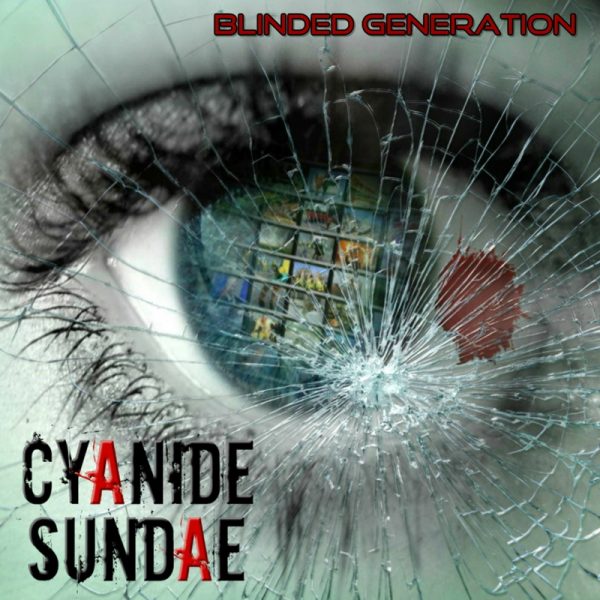 Bands that stick to one genre and style are fantastic in their own right but there’s no denying that there’s a distinct element of speciality and creativity flourishing from the hybrid bands that prefer to blend and mix their material. Cyanide Sundae fall into the latter category with their debut album Blinded Generation serving as a quintessential example of how to effectively create an album that’s consistent yet wonderfully varied.

Opener Can’t Run Can’t Hide immediately introduces the listener to a melodic and atmospheric bass line, a statement against this instrument often being drowned and overshadowed by lead guitar. After exploding into a trademark metal riff, the song eases into introducing Paul Fielder’s vocals, subtle with layers of melody yet still possessing that menacing edge that shifts into pure power during the chorus. It’s a brilliant opener and represents the band well, with little touches such as the doom and sludge infused riff before the chorus which consolidates their musical individuality.

The second track What Can I Do delivers punk energy and a clever refrain that demonstrates the bands lyrical ability that rigidly sticks in the listeners mind.

Cycle by Design opens with a succession of energetic drum beats before leading into Kurt Cobain inspired vocals, demonstrating once again the range of Fielder’s voice. Throughout the album, there’s a selection of delicate clean melodies that often switch in the same song to aggressive yells and screams, ensuring a lack of predictability and definite attention from the listener.

Arguably one of the best tracks on the album, Born Ready is an excellent infusion of rock and metal that provides the perfect soundtrack for headbanging. This is soon followed by the heaviest song on the album, Bleed, featuring guest vocals from James Dawson of Bleed Again. The track still possesses that consistent melodic factor where it’s possible to close your eyes and sway before being propelled into a raspy duet backed by full distortion. Again, the bass is refreshingly prevalent which translates excellently live.

Throughout the album different musical elements and touches unravel, as the band reject a one-dimensional edge. Blinded Generation offers a true journey of progression with an awareness of Cyanide Sundae’s range and talent transpiring at the end of the album.

Cyanide Sundae are a part of Sliptrick Records.