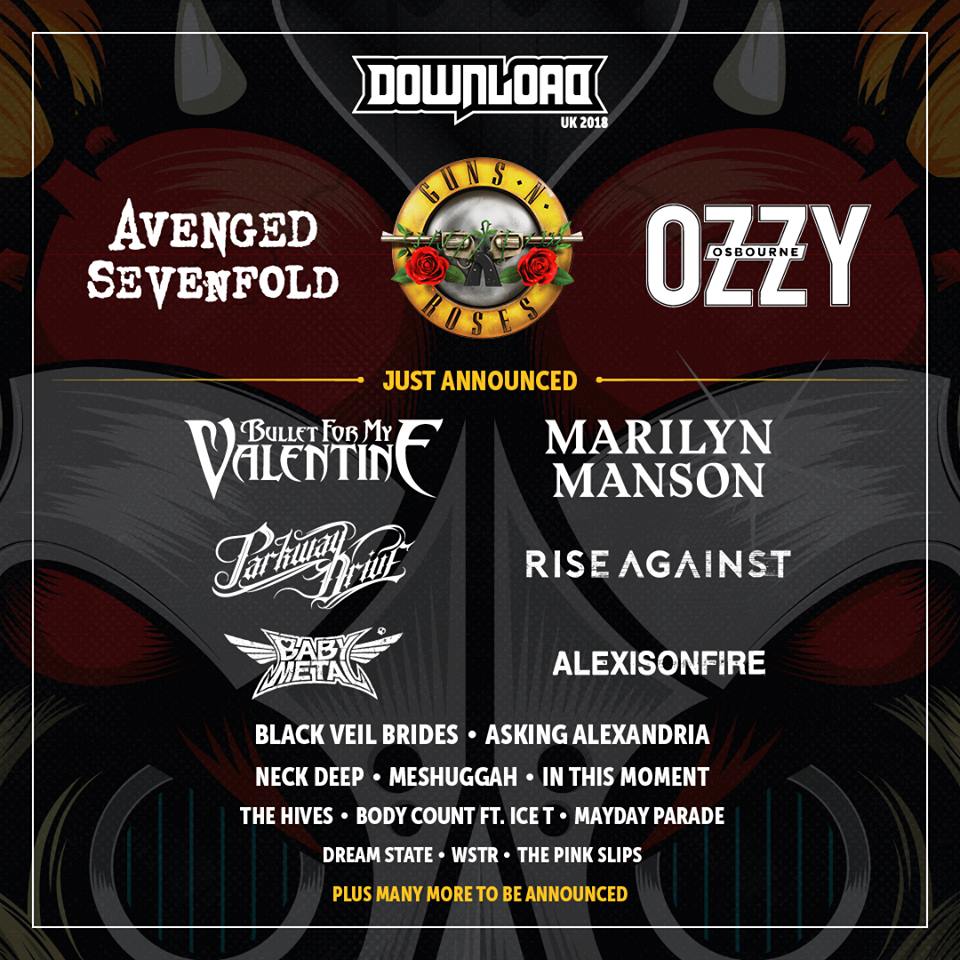 Download Festival, the world’s premier rock event, has announced some of the biggest rock acts
in the world including Marilyn Manson, Parkway Drive, Rise Against, Body Count and more. The
three-day festival takes place 8-10 June 2018 at the spiritual home of rock in Donington
Park, Leicestershire. Tickets are on sale now at downloadfestival.co.uk/tickets.

Download is proud to welcome back the Antichrist Superstar himself Marilyn Manson, fresh off the
release of critically acclaimed new album Heaven Upside Down. The goth rock veteran is more
energised than ever and set to bring his renowned live show to Donington next year.

Since 2003 Aussie rock titans Parkway Drive have gone from strength-to-strength, pushing
boundaries with their epic live performances. Having ascended to the forefront of modern metal
with their latest critically acclaimed album Ire, their ferocious crushing breakdowns and stadiumsized
choruses have them high on people’s lists for future headliner contenders.

British modern metal institution Bullet for My Valentine have also been confirmed to perform at
Download Festival next year. The Welsh powerhouse have conquered the heights of Wembley
Arena along with fellow UK torchbearers Asking Alexandria who will be taking to the stage with a
hero’s return of their original infamous vocalist Danny Worsnop.

Ben Bruce of Asking Alexandria said:
“We have been waiting for half a decade to say this again, “DOWNLOAD WE ARE COMING FOR
YA!”. Download festival is hands down one of the most exciting festivals in the world to play and so we have decided to bring our biggest show to date over with us. We cannot wait to see you all
there. In the words of this year’s legendary headliner, Mama I’m coming home”

Pivotal punk rock heroes Rise Against will have fists thrown in the air, with their ferocious sociopolitical rock. Expect a high energy, kinetic performance from one of the world’s biggest
authentic punk bands, who’ve proved their lasting worth to the genre. Joining the line up are LA
Glam Rockers Black Veil Brides, Swedish extreme tech-metal trail blazers Meshuggah, and post
hardcore legends Alexisonfire whose performance will be a long-awaited return to Download
Festival.

Mind-blowing “metal phenomenon on a mission” BABYMETAL are confirmed to make their second
official Download performance. This UK exclusive appearance will see the return of their
thunderous metal, mixed with infectious J-pop that’s taken the world by storm. With figurehead
Ice T at the helm, Body Count’s mix of harsh political messages and powerful hard-core sensibilities
have made the rap metal icons unmissable, as well as In This Moment who are led by the
entrancing Maria Brink and ready to bring a gothic, industrial, metal spectacle to make
Download proud.
BABYMETAL said:  “We are so happy to announce that we will be playing at Download UK!! We were last there in 2016 and it is an absolute honour to be returning to this prestigious festival next year. Can’t wait to go back and see everyone there!”

Revered purveyors of garage-punk noise The Hives are confirmed, with frontman Howlin’ Pelle
Almqvist guaranteed to leave no stone unturned with a set of frantic non-stop rock n’ roll. Making
their Download Festival debut are pop punks scousers WSTR who have propelled themselves
throughout the last year, as well as emo pop favourites Mayday Parade who are hot off the back
of a successful ten-year anniversary tour.

Selling out Brixton Academy and making massive waves as the break out luminaries of UK poppunk,
Wrexham five-piece Neck Deep are returning to Download Festival along with Seattle’s The
Pink Slips with their fusion of “synth-pop, punk, dance and vintage rock ‘n’ roll”, fronted by the
ferocious GRAVE, daughter of Guns N’ Roses’ Duff McKagan. Last but no means least are rising
stars Dream State with their no-nonsense, melodic emo rock which has earned them their debut
Download appearance.

Download Festival is the home of rock music and takes place on the sacred grounds of Donington
Park, which have been associated with rock since the eighties. The festival attracts icons of rock
to its main stage, plus some of the best and hottest new acts in the world. AC/DC, KISS, Metallica,
Black Sabbath, The Prodigy, Rage Against The Machine, Slipknot, Linkin Park and many more have
all headlined its main stage.