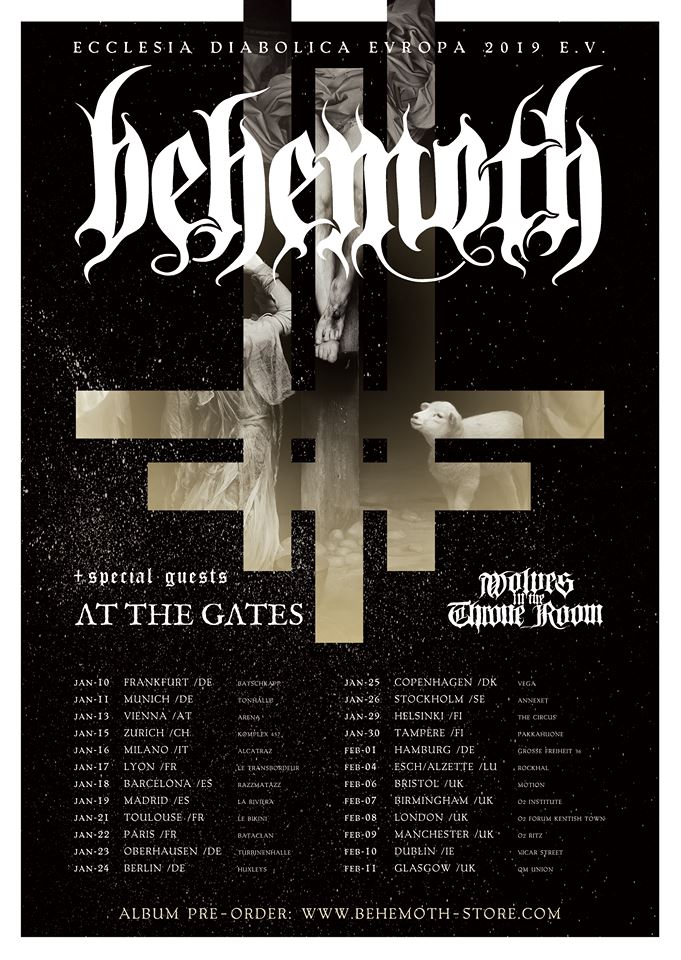 It was finally here.The Ecclesia Diabolica Evropa tour.The most talked about tour for 2019 finally made it’s way to Birmingham. What a way to kick off the year with one of the strongest line up’s I’ve seen for quite some time. Kicking off at the 02 Institute tonight.

Wolves In the Throne Room

The three piece band formed back in 2003 by brothers Aaron and Nathan Weaver and are from Olympia Washington in the US.The last album release was Thrice Woven back in 2017. The band have recently signed with Century Media Record’s and are in the process of writing a new album. The band like to take their audience in to a mythical heathen world that will have you imagining rainfall’s,dark wood’s,countless amounts of fog bringing you an ambient atmosphere where the focus is to take you off watching the band on stage and feeling the music their playing.This is true atmospheric black metal at it’s finest,with the most intense vocal range and those duel melodic black metal riff’s we can all agree sound amazing.The band’s current line up consists of,

Wolves In The Throne Room

Wolves in the Throne Room

My second review of At The Gates and i’m sure there will be a few more as this band are the reason i fell in love with melodic death metal in the first place.Their album Slaughter Of The Soul released  back in 1995 ,was one the most influential death metal albums of all time,and it’s very nostalgic hearing them play the song’s live.Judging from the crowd’s reaction to  Suicide Nation and Blinded By Fear ,went down a treat. One thing that i love about Thomas Lindberg’s stage presence is when he tip’s the microphone stand upside down and pound’s it to the ceiling when announcing the next track. They always’s give a warm welcome when entering the home of heavy metal and love their loyal fan base.The band kicked off their set with self titled song,To drink from the night itself ,off their current album released back in May 2018.The band are currently on Century Media Records and are from Gothenburg Sweden.The current line up consists of,

If you feel gutted that you missed them don’t worry, the band will be returning to the UK this year,and are due to play Boombox Fair London,In August.

The build up to Behemoth’s arrival was getting tense and the crowd were getting impatient. Black mesh was draped at the front of the stage,with the inverted crosses projected over the UK/Ireland map,with the Choir from their latest album playing on loop. Behind the mesh you could see Nergal’s new microphone stand which had the satanist  logo carved in to black steel along with the rest of the band’s stand’s. The mesh moved rapidly and the band came out like a storm with the crowd roaring on their arrival.It began, Kicking off their set with Wolves Ov Siberia,the wait was over and it was time to enjoy.The band were literally on form tonight, with a new approach to their music and a political stand after winning their court case against the Polish government. Pyrotechnics, countless amount’s of smoke and a show not to be forgotten. The band have changed their style over the year’s and their new album in my personal opinion has moved in a completely different direction from the year’s of Demigod back in 2004 . The band were wearing their signature black and white paint with hoods up. Behemoth were promoting their currently released album,I Loved You At Your Darkest, following the success of their previous album ,The Satanist which is an amazing listen. With the vast majority of their dates selling out due to popular demand. One of my personal favorites from their newer material during the set was Blow Your Trumpet’s Gabriel.Those slow eerie beat’s really do get your head nodding and your fist banging. You really can see why Inferno was nominated for one the best drummer’s back in 2018. The band are on top and selling the most bizarre merchandise, from t-shirt’s, coffee and even dog food inspired from their song God-Dog.The line up for the band currently consist of,

It was interesting to see the amount of head gear Nergal had applied during the show, with no word’s being able to describe how amazing he looked. Behemoth are from Poland,currently signed to Nuclear Blast , If you missed the tour ,be sure to check out them out at Download Festival in June. The band are playing the Saturday and it’s not a band you want to be missing.

Don’t forget to check out the photos from Damian John

Behemoth, At The Gates & Wolves in the Throne Room