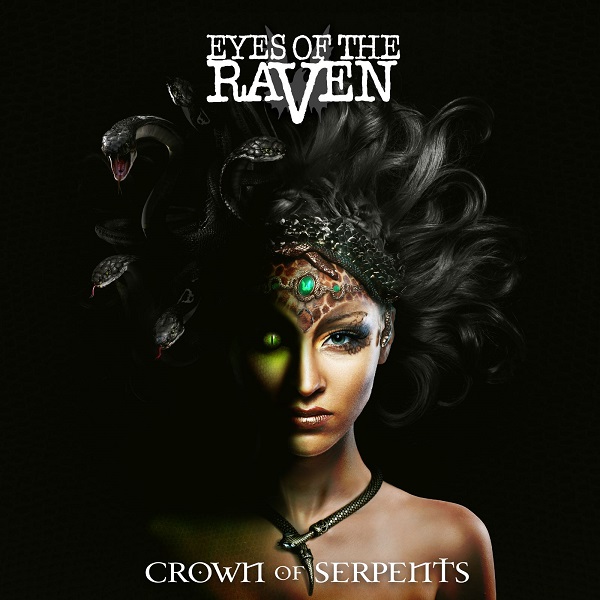 Crown of Serpents is the second EP from Dudley based Eyes of the Raven (EOTR), who are returning from a brief hiatus to continue flying the flag for the Midlands unsigned metal scene. The self-proclaimed ‘beer fuelled collective’ seem set on embodying the part of the heavy metal spirit that values booze, riffs and a good time above all else. A strong, no-nonsense mission statement to be sure, and one that is supported by overwhelmingly positive feedback to their live shows. Often placed under the label of stoner and/or groove metal, Eyes of the Raven take elements of Black Sabbath, Pantera and Black Label Society, alongside some classic rock/metal tropes, to create their own gripping take on the genre.

Putting the groove into groove metal, opening track Black Sun Rising sets the scene nicely. The riff instantly sets a heavy swing rhythm that is bound to set heads banging when performed live. But things really get going with Five Year Winter, a blistering track which uses brief moments of harmonised guitar riffs in a thick, sludgy soundscape with a chorus clearly written for audience interaction. The vocals of Dave Horan sound like a cross between Phil Anselmo (Pantera) and Ivan Moody (Five Finger Death Punch), delivering both menace and melody in an infectious manner. His standout moment is on lead single and title track, Crown of Serpents. A brief, spoken introduction makes way to a restrained, cleanly sung verse that could use some delay or other studio wizardry to add some width and ambiance that would make it fit the mood of the track better. However, that is a minor snag as the verse still creates the perfect contrast and build-up to a chorus that could make the Devil itself quake at the knees. If aliens came down to Earth and asked to hear what heavy music was, then this song would be in strong contention on the impact alone; an impact that owes no small debt to the bone shaking roar of the lead vocalist once the chorus kicks in.

After this, things take a step backwards with I Endure, a slow, bludgeoning track about (as the title suggests) enduring the hardships of life through self-determination and perseverance. A strong, powerful lyrical message? Sure. An interesting and engaging piece of music? Not so much. After less than a minute the slow chugging on the low guitar strings becomes boring and repetitive. EOTR have already shown they are capable of ear catching guitar parts on the previous tracks so I Endure it really does just sound like filler material. The defiant lyrics will go down well in a live setting but listen on the album and it is the only track you don’t feel like going back to. Yes, it is the only poor song as the EP ends on a high with What Binds Us. This is a great mid-tempo rocker that is the only track to feature clean vocals throughout (excluding the group shouts on the chorus) and sends a very unifying lyrical message to end things on.

This is unquestionably a very well put together EP. The sound is big and raw and a great reminder that you don’t need overly distorted guitars to make a heavy sound. There is never more than there needs to be at any point: no unnecessarily flashy guitar parts, no complicated drum fills or dragged out song lengths. This all forms part of the bands’ ethos to create songs that are made to be heard live and to have a crowd of people head banging and singing along. With Crown of Serpents, Eyes of the Raven have cemented their return with 25 minutes of heavy metal that hits hard and is proof that the birthplace of heavy metal can still produce the goods.