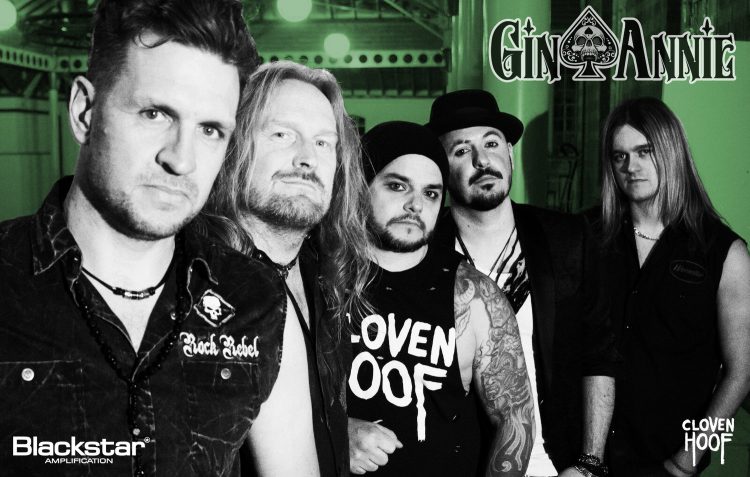 Gin Annie. Chances are you’ve come across the name of late. With a new line-up it seems these Midlands boys may have hit upon ‘their sound’ and are going from strength to strength with it. New management, a healthy tour roster and new video single ‘Fallin’ (check out that BIG guitar sound!!!) being requested on Planet Rock and Hard Rock Hell Radio, no less. We caught up with recent addition to the line up, guitarist Brian Green, for a tour preview and to hear what their next big announcement might be….

Tell us a little bit about what’s been happening in the Gin Annie camp recently?

There’s a lot happening! Firstly, I think the thing to point out is that both Hammer (Bass Player, Phill) and I have only been part of the Gin Annie camp since late November, so the current line-up is still relatively new and in the ‘forming’ stages. The lads we’ve joined – Dave, Byron and Jack – are top lads though. We’ve all got similar ideas on music direction, but there are a lot of ideas now starting to get thrown around. It’s a melting pot and we’re looking forward to seeing what comes out of it. We’ve all got a similar sense of humour too, and that’s important. What I mean is that it MUST be fun doing what you’re doing and we’re definitely having fun.  So, we’re hard at it writing new material, working on social media exposure, web-site set up, merchandise shop set up and Pete Keevil, our Manager at TMR Management, is keeping us busy with plenty of future dates, some of which – I’m sorry – I just can’t tell you about as we’re sworn to secrecy. It’s busy but exciting times and it’s a huge collaborative effort. We’re all digging in to make it work.

There’s a debut album in the works I believe?

Absolutely! As I’ve touched on, we’re writing new material and reworking older Gin Annie original material that was written before Hammer and I joined. They’re great songs and we’re just giving them that new Gin Annie sound. We’ve just released the first single and video, ‘Fallin’ as this line up and it’s been really well received. It reached Number 2 most requested/listened to track on Hard Rock Hell radio. The feedback we’ve had has been very humbling and at the same time overwhelming, and if we could thank everyone personally, we would! We’re very proud of it as our first release. We’ve been back at Shredder Live Lounge Studios laying more tracks down so we’ll be releasing more material soon. Jay Shredder, engineer/producer/God-like character there is a dream to work with and has our sound nailed. We’re anticipating that we’ll have an album ready to unleash somewhere around June/July, just in time for……sorry, I can’t tell you about that yet. It’s confidential!

Melodic, yet powerful, with a nice big slice of guitar right between the eyes, that’s how I would describe what I’m hearing, give us an idea of what to expect on your upcoming tour?

Well, exactly that! We are sponsored by our friends at Blackstar, so the set-up Byron and I have when put through a PA rig does hit you right between the eyes. It’s a big, chunky sound – very full. The songs have a great vocal melody over all of that and they compliment each other really well. Plus, you’ll see guys having fun up there – Hammer never stops smiling!! We’ll be trying new material, polishing up our stagecraft and growing as a band. Every gig is a learning experience and we’re still cutting our teeth, but we believe we’ve got something special in Gin Annie and we just want to share it with everyone. If that guy or girl in the front row is smiling and dancing, shaking their head and getting off on a riff I’m playing, what more could you ask for as a musician? It’s the best connection in the world and we want to make every one of them count, so they come back for more.

So, what’s this big announcement?

Hehehe!! Seriously, I can’t tell you! I’d have my balls removed if I did! But, let’s just say that for us it’s big. For me personally, something I thought would never happen. But….you should never say never! Let’s just say that we hope to be spreading the Gin Annie love a little further afield later in the year…pastures new and all that! Whisky, anyone..?

Get yourself along to one of these shows coming up in March & April, if only to say you saw them before they were big!