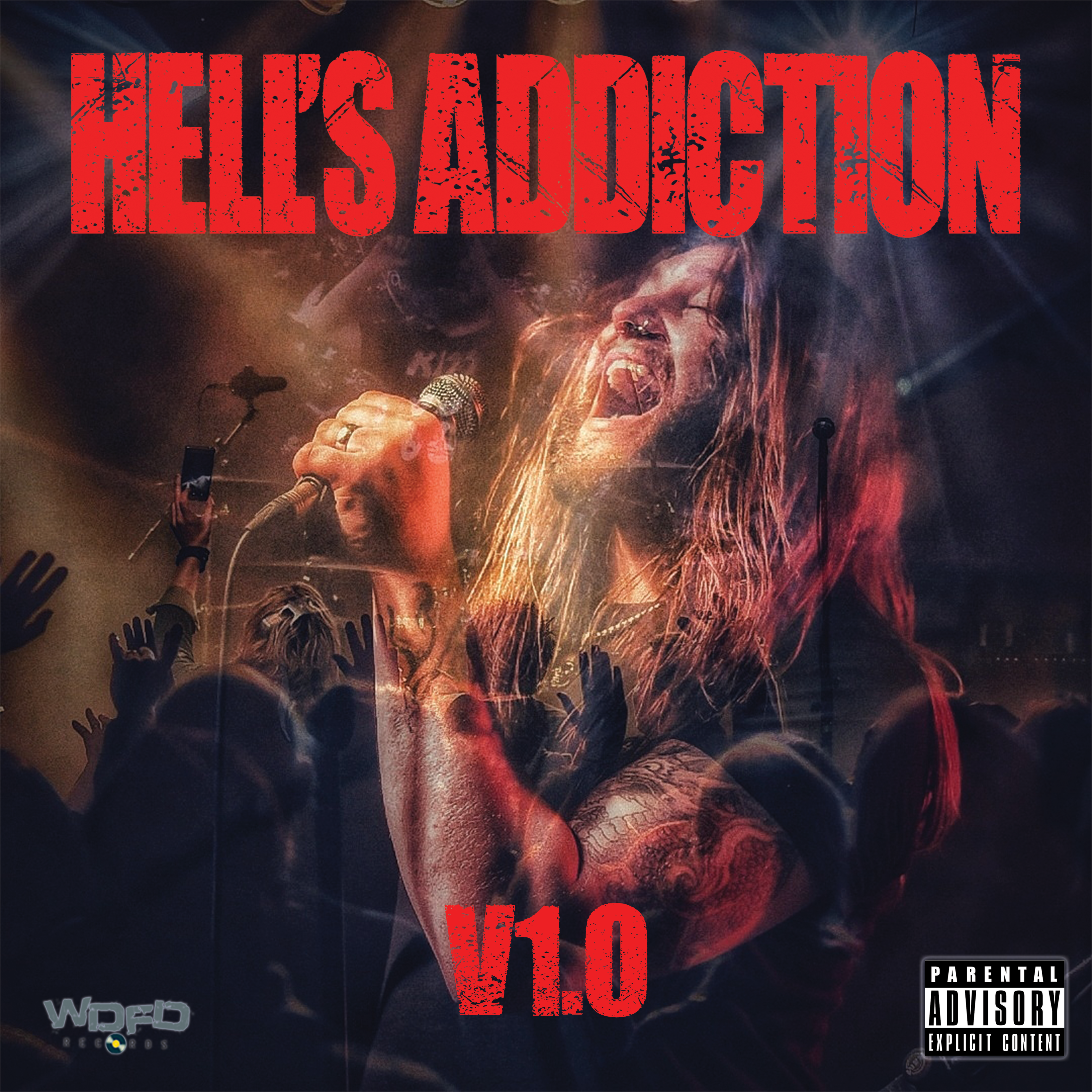 Together for about 9 years, these rockers from Leicester have been described as the bastard child of a 3 way from Skid Row, AC/DC and GNR. I get what that was trying to describe, as HELL’S ADDICTION do carry the genes of all that their forefathers helped to consummate. With numerous gigs, tours and festival appearances over the years, the guys have built up a very strong following. They already have a couple of albums in the bag and have now recorded V1.0 which is a 4 track EP. Due for release on March 8th.

First up ’Free Your Mind’ has an immediate impact, scratchy vocals from Ben Sargent that rise from the floor to the heavens above. The dual guitars from Liam Sargent and Dan Weir collide to pursue repeating riffs that hold and create a really dramatic start to ‘V1.0’.  There are parts very akin to AC/DC’s ‘Dirty Deeds’ era, but these run well alongside the other elements, the hard thumping drums from Luke Morley and Jason Greens awesome Bass. I soon realise this band have been around long enough, to know how to impress from the onset.

‘Masking The Pain’ is slower to begin with, smooth guitar, licking your face. The vocals are again impressive, Mr Sargent is allowed to demonstrate his range, less gravel more screaming, but so powerful. There are also more masterly sounding grooves from the guitars that give this song a chasmic finish. ‘V1.0’ is diverse, so the format includes a ballad ‘If Time Stood Still’ it’s a wonderful statement piece, that captures your heart. A magical mix of slow, clear lyrics and hard driven chords, that culminate in a passionate ending. Last is ‘Running Away’ and it’s back to rocking ways. Dreamily it rides around, giving it an amazing vibe. Twisting, intertwined lead guitars and a harmonious chorus. HELL’S ADDICTION certainly have a distinct sound, Ben utters such quality from his larynx and this helps set them apart from many bands, hovering around the same scene, at the moment.

This Four track EP is a clever balance and captures the bands amazing skill to produce songs that are varied, capable and accomplished. I think this 2019 release is more mature beast than a lot of the previous work. I can still hear the influences, but only momentarily. HELL’S ADDICTION have produced an EP here, that has a winning combined essence. power ridden guitars and stupendous vocals, backed up with secure rhythm. In regards to releases so far this year, ’V1.0’ definitely stands out from the crowd.

‘Ben utters such quality from his larynx’