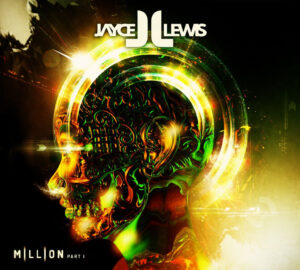 Prodigal multi-instrumentalist JAYCE LEWIS returns with new record, Million (Part 1), the first half of his new double album set for release on 27 October via Caroline International.

‘Shields’ is available as an instant-grat with all pre-orders of Million (Part 1) and is also available via streaming services.

His first release since second album Nemesis (2014), Million (Part 1) features seven tracks of dark industrial abrasion and sci-fi soundscapes. An undoubtable highlight of the album is a guest performance from Queen’s Brian May on anthemic album closer ‘We Are One’. Having previously collaborated with Roger Taylor, Jayce is among the few elite musicians who can claim to have collaborated with every current member of Queen.

Million is a concept album in two parts. LEWIS explains:

‘Right from the beginning, I wanted this to be a concept album…… to take the listener on a committed journey; a series. The subject matter mostly touches on personal experiences, discovery, loss and general life. I think many things within society today has influenced its direction, especially the rapid evolution of technology.

JAYCE LEWIS is touring throughout the UK supporting the legendary Gary Numan in October, catch him on one of the following dates: