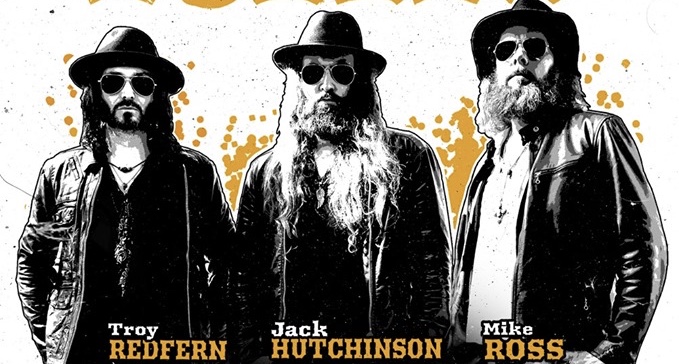 This brace of bands and its exceptional musicians, are for anyone who likes to listen to a tinge of Southern ‘Black Crowes’ Harmony, or Bluesy ‘Allman Brothers’ Rock. The British version of Americana with some ‘Led Zeppelin’ and ‘Humble Pie’ added in for good measure, makes a mouthwatering combination. The  IRON ROAD in Pershore was the setting for something straight out of the Fillmore East tonight.

THE NILE DELTAS are six guys from the Leicester area. After appearing at the Ramblin Fair festival in 2017, where they went down a storm, they have been busy. Last August they released ‘Life’ a 5 track EP, all of which they play tonight. Craig Blencowe is a supreme vocalist, boy has he got soul, ‘Don’t Play With Me’ gets the show going, a simple bluesy song with Craig commanding at the forefront. ‘Lying Eyes’ has a marvellous hook, again it’s not complicated, but adding keyboards by Giles Minkley and two guitars, the Nile Deltas do have a mind absorbing style. The cover of Free’s ‘I’ll Be Creepin’ is a stroke of genius, a pretty obscure one from 1969, it’s given a worthy rendition. Title number ’Life’ grinds it up like raw ’Crowes’, or ’Blackberry Smoke’ purely a stomp through the cotton. ‘A Little More Soul’ and ‘Dust Me Down’ are the final ones from the EP, the latter being the new single. The synchronised slide guitars of Nige Thompson and Tom Lord have to get mentioned, that was pretty impressive guys.You also get a smell of Zeppelin’s, ‘In My Time Of Dying’ along the way, so well executed. A superb band, completed with Bruce Hartley on bass and Damon Clarridge on drums, great choice for the support slot tonight.

The Combined lineup of Troy Redfern, Jack J Hutchinson and Mike Ross, or RHR as they are known, is a show I’ve been looking forward to for weeks. Earlier in the year I did witness Redfern and Hutchinson playing separately at the Crazy Cowboy Fest, they were both mind blowing. A new LP from RHR entitled ‘Mahogany Drift’ came out last year and the trio, follow it for the first 7 songs. ’She Painted The Moon’ gets it all underway, a nice introduction with its steady pulsating rhythm. ‘Rapture’ is more upbeat with Hutchinson tasked with vocals, it’s a catchy rocker. After some re-tuning, its Redfern’s turn to lead, ‘Home On Judgement Day’, is more deep, the others provide backing vocals and Darren Lee on drums is constant, pretty well overlooked I suppose with such talent in front of him, he also has a huge responsibility to keep it tight and with these guys that’s no mean feat. The three guitars mix in jam like fashion, on the instrumental ‘Mahogany’, a basic tune laced with intermittent solos. ‘Ghost Hound Rider’ sees Ross back on main vocals. Then another chance for some riveting guitar courtesy of Redfern during ‘Satisfied’ and a heads up to Jack Browning on bass. Hutchinson slows it right down for the appropriate titled ’Solemn Song’. I wasn’t expecting any Frank Zappa, but then they covered ‘Willie The Pimp’, which was fabulous to hear, more solo work in-between the melody, jamming it again.

More tracks from Mahogany Drift flow from the stage, ’Holler’, ‘Leviathan’ then there’s some slide guitar on ‘Miles Away’ that is breathtakingly precise.‘Rattlesnake Woman’ is a Hutchinson track off his 2017 ‘Paint no Fiction’ album, a groove infused song, with screaming guitar. I like the way they can play each others songs with faultless compromise. The encore is the Joe Walsh classic ‘Rocky Mountain Way’ which lasts longer than the original, they go out with the audience applauding, so many contented smiles tonight. Contemporary British Blues/Rock is alive and well, thanks to these three, heartwarming to see this type of a performance in 2019, solos, unselfish sharing and a part jam session, to create something remarkable. Jack Hutchinson said they were much in the style of the Allman Brothers, yes of course, but a British version.