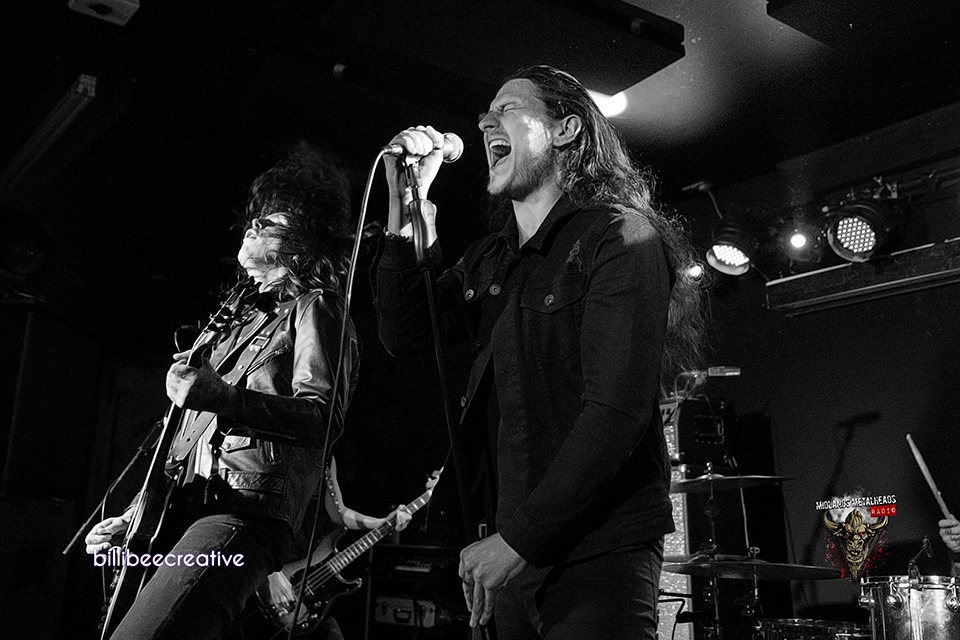 It hit BIGFOOT fans hard when it was announced that after 5 years, they were calling it quits. Nevertheless they are honouring all shows and will embark on a farewell tour later on in September. With ex Switchblade City vocalist Sean Seabrook, who joined them in August 2018, it’s as support to The Treatment that we are graced with them tonight.

Most of the set is from the 2017 self titled album, the first being ‘Tell Me A Lie’. I am immediately taken by Seans voice, very strong and distinct. ‘Prisoner Of War’ is a steady climb with slow and mood filled calmness. Sam Millar and Mick McCullagh on guitars, are able to express the more mellow side of their playing talents. With ‘Freak Show’ the pace is rampant, here is a hook that gets into your arteries. A ballad of sorts, ‘Forever Alone’ transfixes us into a few minutes of solitude, beautiful lyrics and a heartfelt melody. Another from 2017 is the catchy ’The Fear’ whereby the singer lets loose with a more resonant pitch. ‘Blame It On The Dog’ starts with Tom Aspinall’s drums blazing, it’s a more thumping song and Bigfoot take time out midway to funk it up. Matt Avery on bass is given centre stage to strum a little ‘Extreme’ chords. Audience participation is ordered and there’s a cool solo spot from Millar’s Gibson. ’Uninvited’ more of a rocker, ups the anti for a final furore and they bow out to warm applause. It will be sad to see them disband, however they have published a farewell message, a snippet of which I quote here.

‘No one is giving up music, so keep an eye out and I’m sure everyone will be bringing new music to you in the future.We haven’t fallen out and are still good friends but we all feel this is the right decision at this time. The band has been our life for the past 5 years and we have worked so hard to get to where we are after starting from the bottom. Pulling the plug has probably been the hardest decision any of us have had to make and we hope that people respect how difficult the decision was and that we have considered all factors’. Bigfoot.

THE TREATMENT have been knocking about since 2008, although there have been some lineup changes, they continue to ‘Fly The Flag for British Rock and Roll’ as per the mission statement on their facebook page. Touring to promote the new 4th album ‘Power Crazy’,  they look the part as they hit the stage, tight black jeans, leather jackets and long flowing locks. ‘Hang Them High’ and the tantalising ‘Let’s Get Dirty’ roll off fast and loose. Singer, Tom Rampton has a voice that’s a perfect fit, he reaches high and screams at us with his charming looks. He administers us to join in for ‘D**K F**K F**T’ and we duly oblige. ‘Run With The Dogs’ is an older number, but still remains fresh, the guitarists Tao and Tagore Grey, are forever roaming the stage, impressing us with perfect fret work. If there was any doubt that AC/DC played a part in these guys upbringing, it is demolished with ‘Bite Back’, straight out of the old school ‘Dirty Deeds’ sounding era, it’s backing vocals definitely ‘eat us alive’. The new single ‘ Luck Of The Draw’ is another dimension, slow bar room blues and a drawl of a chorus. A cool guitar solo mixed with apprehension as the song continues and distorts into a blinding finish. It’s straight into ‘I Bleed Rock and Roll’ for more panache from the Cambridge rockers. ‘Emergency’ is a fast riff of a number, that ends proceedings until the band re-emerge for an encore. ‘Get The Party On’ and ‘Shake The Mountain’ make the Slade Rooms faithful, deliriously happy. A marvellous band to go and see if you get chance, they have supported the likes of Alice Cooper, Steel Panther, Kiss and Mötley Crüe in the past, it’s about time they got some recognition of their own.