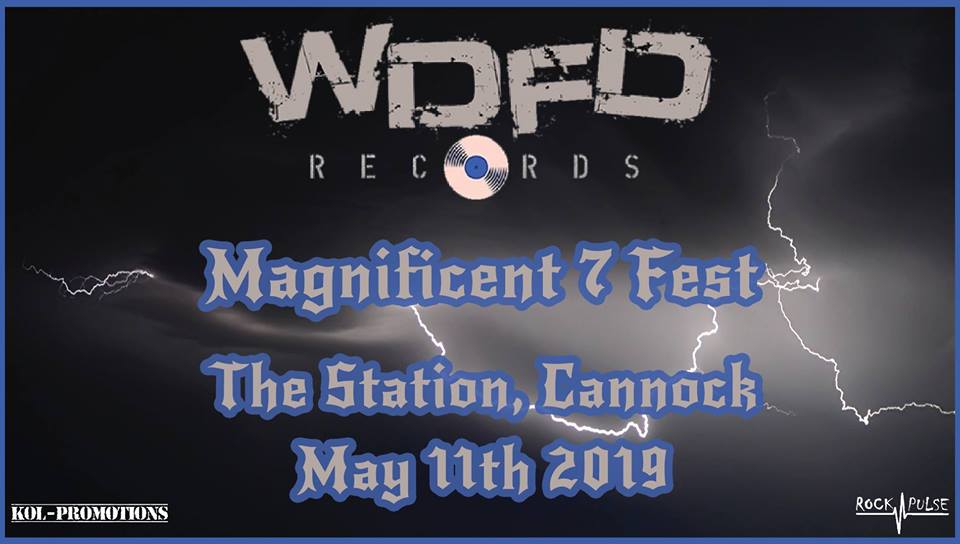 It was a 5 o’clock kick off on Saturday at The Station in Cannock, for the Magnificent 7 festival, in association with WDFD Records. When I arrive the first band are in progress and there are quite a few early birds already settled and enjoying the show. Promising to be an entertaining evening, hats off to WDFD Records, Shaun Haynes at  KOL Promotions, Rockpulse, TMR Band Management, Roulette Media compere Pete K Mally and The Station in Cannock, for getting this together.

I would be right in saying that PORCELAIN HILL are not that well known this side of the pond, although they have been over previously, that is about to change. Here is the story so far, for a second time, the three amigos currently residing in Southern California and doing ok since 2012, decide to come to the UK for a few months, they hire a dodgy van and take to our roads in pursuit of some gigs. Asking for nothing more than a place to sleep, taking time to visit our towns and making friends as they travel around. It worked before and I’m sure it will work this time, picking up more followers as they play for whoever will have them. This late afternoon slot is maybe a bit too early, I would have put them on later, however they are not deterred, they are just happy to play. We are in awe as Darnell Cole, aka Big D, fires up his guitar and starts playing the Blues with Funk and Rock slung out either side. Singing with the panache of Jack Bruce and shredding like Hendrix, Big D is on display like a newly discovered work of art. The modest space he’s given isn’t enough, its not long before he’s amongst us, completing a whole number playing his guitar, slung across his back. They quote Etta James,Black Sabbath, Johnny Cash and Eminem as influences and favourites, now that’s a list to be reckoned with. Drummer is the talented Nathalie ‘Wildfire’ Campos, who does well, managing to keep a steady pace. On bass is Lucas ‘LZA’ Martinez, who kicks out some stunning melodic lines. Incredible songs from the two albums ’See It Now’ and ‘Vintage’ have us absolutely gob smacked. A few of the Cannock crowd, like me, may have seen Randy California and Jeff Beck, so know how a brilliant guitar player can charm you. This guy is pretty much up there with them, give him a few more years and he will have matured into a complete maestro, mind you he’s not far off now! I hope they are given more opportunities to play while over here, I see a few shows have been put together already. They would go down well in the future, supporting Living Colour, Kings X or even Vintage Trouble, such is their unique style, outstanding.

SPIDERVAYNE are a bunch from Essex, who are colourful and fun to watch. Bass player Kev races around the stage, his face and torso matching his jeans, with splashes of bright paint. Mitch has a striking luminous guitar to balance the spectacular, rainbow effect. Although the music is rather darker in contrast, plenty of grunge laden songs and they cover Alice In Chains’ ‘Man in a Box’, one of my all time favourites. They also manage to delve into the realm of Metallica and Pantera during their show, with some very down to the ankle grooves. In fact singer Danny Murphy does let loose some pretty mean and deep vocals, as accustomed to the late great AIC Layne Staley. All in all the trip up to Cannock was worth it, they were well applauded. Keep an eye out for them, they are an entertaining lot.

Locals SHYYNE are fronted by the one and only, they broke the mould, Toni Gale. The charismatic blond is a natural up there on the mic, pleasing to watch and full of ad lib’s. We are confronted with the sleaze driven rock and roll, that Shyyne are well known experts in delivering. Expressing themselves in the manner of 80s glam. It all started when Toni and guitarist Mark Wilkins, got talking in 2012 and decided there wasn’t enough eyeliner and scarves in the neighbourhood, so went about putting it right. A mix of L.A Guns, Faster Pussycat, Poison and even Dokken are held as influences, you can tell by the end result. Joined by Bev on drums and Matt Freeman on bass, the ride continues and a new album is going to be out very shortly. Tonight we are given a couple of pre-release tasters. I won’t disclose too much as I don’t want to ruin the launch party, but hell yeah, sounds pretty awesome.

THE HOWLING TIDES are also local, being from nearby Uttoxeter. The foursome started out in 2014 and have received a lot of praise among the media. They are regulars on the gig guide and have supported some well known bands like The Black Star Riders. They were also winners of the Slade Rooms, Battle of the Bands contest in 2016. A lot of the songs tonight are off the Self titled EP which came out last year. I am impressed right from the off, god these boys are tight. A mega output from the two guitars, shrilling one moment and in a deep rift the next, powerful stuff. Rob Baines has a rasp of a voice, scraping out clear and concise lyrics with a vengeance. They do have some killer songs, the room has filled up for these, so many here know how good they are already. A really decent set, loads of heads nodding and The Station is rocking.

With their good looks, long hair and distressed jeans, the COLLATERAL guys were a bit of a distraction, before they even touched the stage. I had seen a lot of hype on social about them, but not actually listened to anything. I was expecting a heavy, thrash sound, don’t ask me why, just first impressions. So it was a bit of a shock when they started playing. Melodic, with stacks of mildly raucous guitar, bit like a heavy Bon Jovi, Collateral are an eyeopener. ‘Going With The Wind’ is off the EP, ‘4 Shots!’ silky smooth harmonies and catchy, spellbinding words. Also from the EP, the ballad, ’Just Waiting For You’ demonstrates singer Angelo’s ability to turn it down and present some teary and emotional vocals. There is a jaw dropping solo from guitarist Todd Winger, before Jack on bass, backs him up on ‘Midnight Queen’ which has a bit of a Country feel and loads more strumming from Todd. It is the new single, ’Lullaby’ that they end on, a lot more rocky with a stack of hooks. There are also plans for an album later this year, so start saving. Collateral are in the final of the competition, to participate on the forthcoming Bon Jovi cruise, will they be there?, yeah no probs.

THEIAuk, pronounced Thee-uh, are on next, with stand-in drummer Herbie from the Howling Tides, as Jake recently left the band. These guys are just straight forward Rock and Roll, since 2012 they have toured and played relentlessly, they have a huge following and are favourites all around the country. Tonight they are met with an ecstatic audience, singing along from the first song. The sound engineer has cranked up the volume and Kyle Lamley is already up front, with his unadulterated way of telling you how it is, a fantastic frontman for sure. Also on guitar Kyle is able to chuck out some awe inspiring riffs. The set is electric, the songs vary from outright power rockers to mean and moody, soul destroying boogie, for want of a better term. Taking time to thank everyone Kyle and Paul on bass bring their show to an end, I hope they find a replacement drummer soon, as I think they have improved immensely since I saw them at last years Stonedeaf Festival. With a couple of albums already completed, the last being the 2018 ‘The Ghost Light’, which was widely acclaimed, it seems Theiauk are treading down the road of success.

Headliners SKAM are another 3 piece, with a reputation for blasting out a flow of power laden rock. They start with ‘Bring The Rain’ from the concept album ‘The Amazing Memoirs of Geoffrey Goddard’ a story about a test pilot who travels through time.(The video for this is so ‘Boy’s Own Annual’, really worth a watch) It’s a steady beginner, played with feeling, Steve Hill on vocals and Guitar, offering up a decent solo mid-way. ‘Iron Cross’ is another from the same album, punchy and again Hill lets loose on his frets. The Station is still filled at this late hour, testament to the popularity of these Leicester lads. Matt Gilmore on bass and drummer Neal Hill accompany on backing vocals, as we sail through more from the back catalogue. We are also presented with the brand new ’Wake Up’, given its first airing and which will be on the new album, yet to be released. ‘Massacre’ and ‘No Lies’ both going back to 2011, are the finishers. At midnight they take a final bow, a very entertaining band.