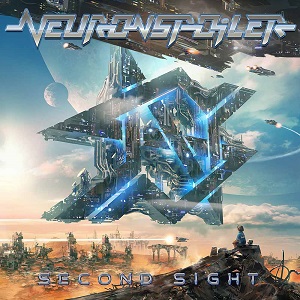 There’s been no shortage of quality heavy/power metal bands cropping up in the UK in recent times. Neuronspoiler are part of said crop, receiving a warm reception for previous releases, 2010’s EP No One’s Safe and 2013’s full length debut Emergence. After a four year wait, the five piece are back with the cleverly titled Second Sight, their sophomore record.

Any given album in this particular sub genre is going to be reliant on the quality of the vocals, and luckily for Neuronspoiler, they have themselves a gem in the form of JR. A confident, charismatic singer who effectively blends mannerisms from the likes of Dickinson, Dio, Kiske, Tate and Halford (whilst also retaining a semblance of his own identity), his demeanour and presence helps to elevate much of the material here (a fair portion of which is already pretty good anyway). When JR is not leading the line, the remainder of the group show they’re more than capable of stepping up to the plate, with tight instrumental performances aided by a mix that allows every member to be heard. The guitar tone is perhaps a little lightweight, but retains a razor sharp quality that compliments the riffing, whilst Erick Tekilla’s bass sits prominently in the mix in Harris-esque fashion, ably supported by new drummer Matthew Monroe. The group have had a high turnover of skinsmen in recent years, but Monroe fits in with minimal fuss (I could do without the artificial sounding bass drums at times however). It’s the only blemish on what is a refreshing production job that manages to be clean and concise without sounding overly clinical and polished.

“Reclaim Your Path” opens the record in suitably energetic fashion, with a looping prog power style melody and driving verses, but it merely serves as an appetiser for the banquet to follow. “Slay the Beast” succeeds in slaying all other tracks on the record, with some mighty riff work from Pierre Afoumado and Dave Del Cid, both of whom are one upped by aforementioned star man JR, whose vocals are at their best here as he shows off his exemplary range. “This Is Revolution” veers in a more rapid fire, power metal direction than most songs here, but even so, it’s still comfortably in heavy metal territory, and perhaps typifies Second Sight in general; late ’70s/early ’80s heavy metal with a healthy late ’90s power influence. The soft verse / heavy chorus trope is utilised well in “The Brave One”, a song that is short of surprises but packs plenty of quality, particularly in the solo section. “Queen of the Darkness” ticks the ‘fist pumping, mid tempo’ box; a heavy, deliberately paced number that still has the intrinsic melodic traces that run throughout the record, particularly in the speedier interlude, where the riffs and solos really come to life. Simple riffing and a stable, pulsing rhythm carry “Hidden Agenda”; a memorable and catchy track that sees Neuronspoiler taking their foot off the pedal slightly and still coming up trumps. Unfortunately, the closing duo of “Heart of a Lion” and “Murder City” fail takes flight; two tracks that flatter to deceive as their simmering tensions never quite culminate in anything substantial. It sees Second Sight end with something of a whimper; not too catastrophic, but they’re definitely two of the weaker tracks on the album.

With the advent of the Internet, the metal marketplace has become more over crowded than before, making it difficult for smaller acts to stand out. On the flip side, it also makes it easier to access music than previously. In this environment, the name Neuronspoiler don’t yet have the clout to demand attention, but I would urge anyway who is a fan of heavy or power metal to give Second Sight a go, as you’ll be rewarded by an entertaining, well written album with a handful of tracks that suggest there could be even better things to come.

Highlights: “Slay the Beast”, “The Brave One”, “Hidden Agenda”

Second Sight is available worldwide on October 20th via Dissonance Productions, and can be purchased here.