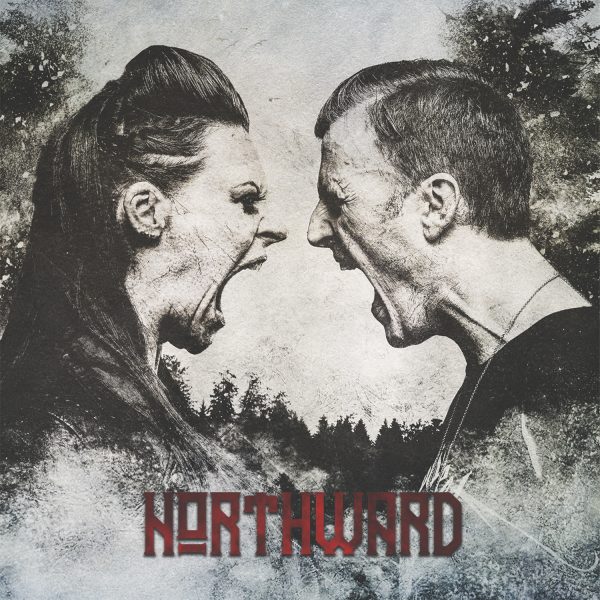 If you’re like me, then you would agree that Floor Jansen is the best thing that has happened to symphonic metal band Nightwish since Mr Holopainen (keyboards) received his first music lesson. If not, then listen to their Showtime, Storytime live album and just try and disagree. The prospect of her formidable vocals being added to a hard rock album was exciting to say the least, and it was a prospect I didn’t know I was dying to hear until the Northward debut album was announced. A project that was first mooted around a decade ago, Northward is a collaboration between Jansen and Jørn Viggo Lofstad (guitarist in progressive rock band, Pagan’s Mind). The whole thing was written and ready to go, but other commitments got in the way and it is only now that the songs have finally been recorded and released for our pleasure. My only reservation going in was hoping that they wouldn’t do what Nightwish did with Endless Forms Most Beautiful and under-utilise the vocal talents of the singer behind the mic.

It turns out I needn’t have worried. The main style of singing throughout is not that far removed from the more recent Nightwish tunes, although there is noticeably more attitude and swagger in songs such as lead single While Love Died and Big Boy (and the latter also shows off her range by going up through nearly two octaves in a single line). Jansen moves from in-your-face hard rock brashness to gentle falsettos and everything in between across the eleven tracks. If you are already familiar with her as a vocalist, then there will be little in her individual performances that will surprise. You already know that she is pretty darn good, and adapting to a hard rock setting sounds like a completely natural transition for her.

I have already described Northward as a ‘hard rock’ album several times, but I’m really doing the record a disservice. Yes, many of the tracks blatantly fit into that category, but that hasn’t stopped Lofstad from throwing some more progressive elements in there. While Love Died is a prime example: the traditional verse-chorus-verse-chorus-solo-chorus format has been largely ignored and instead replaced with, well, I’m not even sure how to describe it. Verse, pre-pre-chorus, pre-chorus, chorus? Verse A, verse B, pre-chorus, chorus? Who knows, who even cares? All I know is that it gives you a range of styles, hooks and riffs, all while comfortably retaining a hard rock sound. There are a couple of moments where this doesn’t quite work: Paragon for one clasps loosely at an identity for the song, with the contrasting verse and chorus not quite becoming more than a sum of their parts. Storm in a Glass, Let Me Out and I Need form the upbeat rock tracks, with hugely catchy choruses as the one common feature (although I would argue that the solo on Let Me Out is the most infectious part of all three). Drifting Islands is the heaviest track available, and also features Floor Jansen’s sister, Irene Jansen, on guest vocals (the plan ten years ago was to feature Myles Kennedy!). As would be expected from siblings, their voices sound pretty similar so there was no chance of this not working. Their combined vocals on the chorus adds a weight and power that drives the song forward. The real oddity on the album is Bridle Passion: an acoustic bedtime lullaby that could lull even the most stubborn of youngsters into a slumber. This one really surprised me as it is so gentle and beautiful compared to the rest of the album. The singing will probably bring tears to the eyes of some, and only the hardest of hearts won’t feel a sense of peace and tranquillity on some level while listening to it.

For songs that were allegedly written ten years ago and are only now seeing the light of day, the eleven tracks that make up Northward do not sound out of place in the modern music scene at all. Jansen’s vocals sound more formidable and energised than ever before: the change from the regimented and dramatic production of her day job clearly suits her. Lofstad churns out riff after riff like he’s been playing this style his whole life, but throwing in enough twists and turns to remind you of his more progressive background. The combination of these two talents, plus a pristine production, has made one of the most interesting and diverse hard rock albums you’re likely to hear this year. When the good parts of the album are this good, it’s easy to overlook the few parts that don’t quite work. I truly hope this isn’t a one off and that we get a second album within the next ten years.

Highlights: While Love Died, Let Me Out and Timebomb.

Northward is out now via Nuclear Blast Records and can be purchased here.