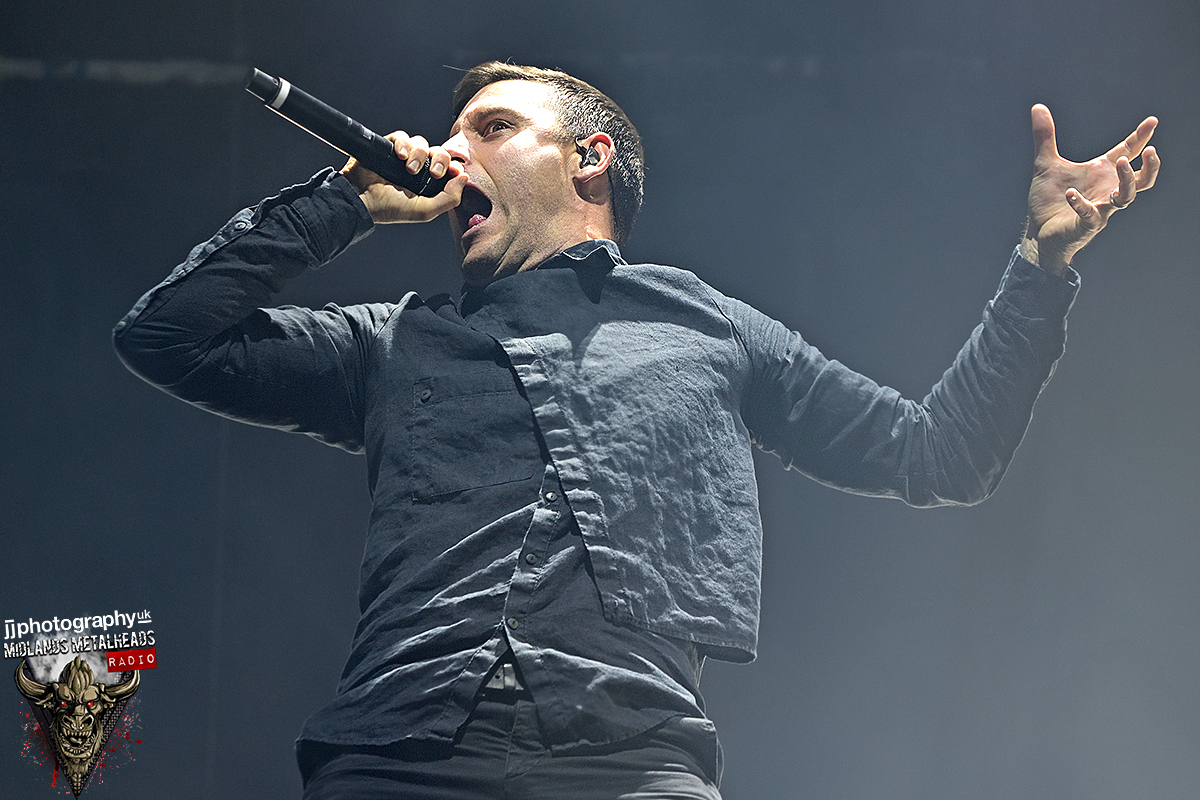 It’s no secret that Parkway Drive have been eying larger stages with their last two releases- Ire and Reverence. Often heavy bands fail to appropriately adapt their song writing to suit larger venues as they continue to grow, and as such the live show suffers. This arena tour is a chance for Parkway to show they can succeed where other promising bands have failed and continue their upward trajectory into metal’s upper echelons.

But before we get to Parkway there are two bands to talk about. First up is their fellow Australians, Thy Art Is Murder. These deathcore bruisers generated quite a lot of hype when they first came out and on record it’s quite easy to see why. They may not have pushed the boundaries of the genre but they’re very good a what they do. Often with such extreme bands the intensity of their songs can be lost in cavernous venues but Thy Art… sound massive and when the grooves kick in a sea of heads starts nodding along. Unfortunately, the band themselves look a bit lost on such a large stage, there’s not much movement or energy in the performance. Frontman CJ McMahon paces back and forth over the stage, but rather than a menacing prowl or a furious march it comes across as a relaxed saunter. The stage patter is sparse- good for a short support set- and varies in quality (“…This song is called Reign of Fuck Off Darkness” was a little cringe inducing) but overall, it’s a solid set that’s bound to see Thy Art… earn some new fans.

Coming barrelling onto stage to Thin Lizzy’s The Boys Are Back In Town, main support, Killswitch Engage, are met with a hero’s welcome. The metalcore pioneers play like they’re headlining the place. Colossal anthems are thrown out with casual abandon, the whole band move with purpose and energy. Vocalist, Jesse Leach, is on stunning form as he leads the crowd through colossal singalongs like Always and In Due Time. While their last album, Incarnate, was a mixed bag, singles Strength of The Mind and Hate By Design got some of the best reception. The energy and vibe in the room was amazing and the level of performance made me question why Killswitch aren’t headlining this venue in their own right. Seeing a see of hands clap along to My Curse is almost as touching as hearing the cheers of support as Jesse mentions his mental health issues. But ultimately, even eighteen years later there is one song that will always be the centrepiece of a Killswitch set. When the band launch into My Last Serenade there isn’t a single person not singing along with the chorus. It’s a generation and genre defining anthem.

Most bands would dread following a band like Killswitch. Parkway clearly don’t. Many rock bands who reach arena level think the spectacle of the show only needs a big TV screen. Parkway know they’re all wrong. They really understand how to use the space of an arena, from walking through the crowd surrounded by flaming torches to reach the stage as pyro goes off on stage and on the sound desk, to a multilevel stage, full string quartet, rising platforms and walls of smoke and light. The band are full of energy and there’s not a moment you can take your eyes off the stage. Vocalist Winston McCall is utterly riveting as he delivers the spoken word sections from Reverence and his vocals are beyond reproach through every song. The songs from Reverence and Ire sounded massive and really translate to the larger stage but it’s surprising how well the older, more brutal songs went down. As a relatively new Parkway fan it was a happy reminder just how many anthems they have in their back catalogue. Idols and Anchors particularly stood out, just due to the colossal singalong with the guitar line. Parkway remained surprisingly humble throughout, repeatedly thanking the crowd for showing up and supporting them and marvelling at how a band this heavy can reach this size. The answer is clearly by being brilliant. Closing the set with a pyro filled one-two punch of Crushed into Bottom Feeder was a masterstroke, especially following The Colour of Leaving- with McCall and a cellist performing from the sound desk. All this begs the question: when will Parkway being headlining festivals? I suspect we won’t be waiting too long.