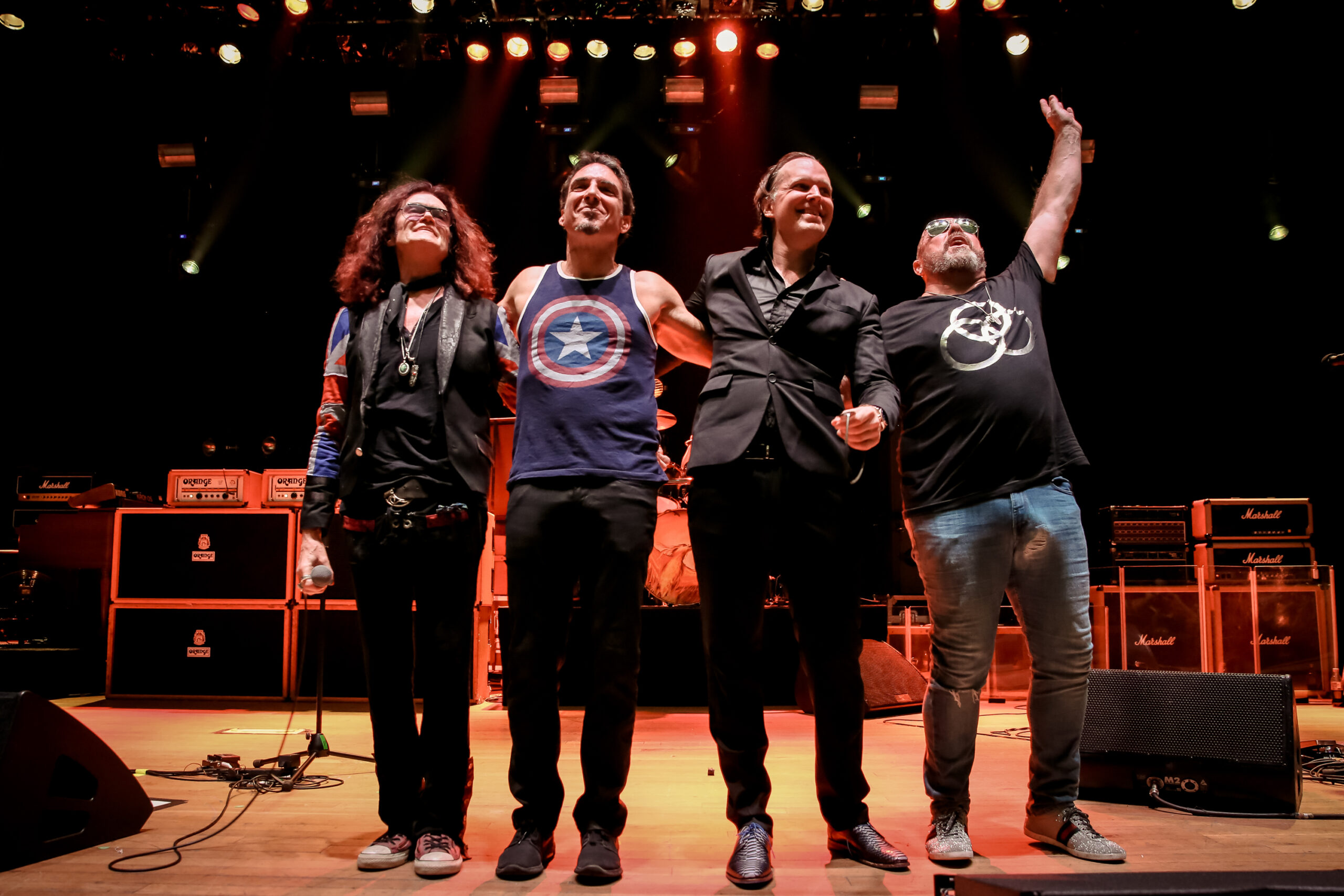 The first gig I ever went to was Hawkwind at Wolves Civic back in December 1972 !!!

Fast forward 45 years and here we are again, the venue still stands….but the many times I’ve been coming here, I can honestly say I have NEVER been in a situation where literally EVERY single car parking space in the City was FULL !!! “Standing Room Only” seemed like somewhat of an understatement at this point in time….. I had been told the on-stage time for the band was 8.00pm and I arrived in Wolverhampton at 7.25pm thinking I’d have plenty of time to get parked and to the venue before the band took to the stage, but I missed the first few songs having had to park on top of a bus stop half a mile away !! By the time I’d walked to the gig, it was 8.20pm and I’d missed the first few songs, ironically, they were just coming to the end of probably my favourite BCC song as I collected my ticket – “SAVE ME”, bummer….

Judging by the number of fans still coming through the door, I was not on my own, but with what seemed like the entire population of Wolverhampton already in place, we were in for a damn good night. Being a short-ass, my chances of getting a good view (I was in the stalls) was virtually zero, but after hunting to find an available space to stand amongst the assembled masses (at the back) with mere fleeting glimpses of the band, it was all about the music and fuck, can these guys play !!!

Let’s take a potted look at the band’s history. They first played together during an encore of a JB gig back in March 2010 when they belted out what would become the first true BCC number “One Last Soul” and the Deep Purple classic “Mistreated” – which were both featured in tonight’s set, the latter as the final number of the evening and shit, did the band rip it up. It certainly made a change from the mighty “Burn” !! With a self-titled debut album following shortly after, over the next four years, the band released three albums, gained a massive following and numerous awards and accolades from the music industry, but after the release of the third album “Afterglow” it became apparent that all was not well in the BCC camp between Bonamassa and Hughes, it all started to go a bit pear-shaped for the band due primarily to JB’s hectic touring schedule and GH’s dogmatic desire to make the band work. The band “split up”, JB went back to his solo work, GH formed the short-lived California Breed with band-mate Jason Bonham and Derek Sherinian joined JB’s touring band plus solo and session work, it all seemed quite final and once again, a “super group” sadly bites the dust. Three years later, JB and GH have apparently resolved their differences and a fourth album is announced – the creatively titled BCC IV !!

Four albums in so there is no shortage of material and looking at the set-list, I think every album was well represented, but the set did have its highlights.

It is very obvious that any conflicts of interest have been well and truly resolved, this was a group of best mates having a whale of a time, the first time they’ve played on stage together for six years (according to JB) and boy were they on FIRE !! Jason, who comes from a well respected lineage, first played drums when he was in nappies (according to Glenn), Derek, surely one of the most articulate and kick-ass keyboard players on the scene at the moment, Joe, a man who can sell out the Albert Hall for four straight nights and Glenn, by and way the eldest member of the band, but what a wealth of music and tradition he brings to the stage, truly humbled to be still standing after we have lost so many of our beloved icons of late. Ever the front-man, he regaled us with stories between numbers of how the band got together, his love for the band and the music and most of all, for us – the fans. The man may be in his “twilight” years, but this guy will be ploughing on well into the foreseeable future.

As I stated earlier JB, surely one of, if not THE best Blues guitarist on the scene at the moment truly came to the fore during a stunning solo on show favourite “Back Country”, which seemed wholly appropriate considering Jason and Glenn were both back on home turf and with only two dates, it was truly an honour to think they respect their roots enough to grace us with their magnificent presence so early on in 2018.

Over the next few hours we were all transfixed. Glenn Hughes is a freak of nature !!! At 65 years of age, he looks, plays and performs like someone 30 years younger, it’s enough to make you sick and that voice, shiiiit… I’m surprised all the windows were intact at the end of the gig, man he can still reach the high notes, it’s no wonder he is heralded as the “Voice Of Rock”, outstanding.

Let’s face it, get four World -Class musicians on the stage together in front of a horde of adoring fans and it can only be electric. Anybody who has seen the individual members of the band will realise that when you bring them all together – magic happens and those of you looking at the London gig, you are TRULY in for a memorable evening of pure-unadulterated ROCK THE SHIT tuneage that will quite literally blow you away.
The set was not without its “glitches”, during “Cold” the sound kept breaking up for a few minutes, but the gremlins were soon put to rest as the rest of the set went event free, many thanks to the team of technicians and sound engineers beavering away in the background. The lights and sound were perfect and for once (probably as I was way at the back of the hall), I came away without ringing on my ears. At 10 minutes past 10.00pm, the show came to an end and I think it’s safe to say, we all walked away with a big smile on our faces – The Boys Were Back In Town, Hell Yeah !!!

Full credit given to Christie Goodwin for the stage photos.