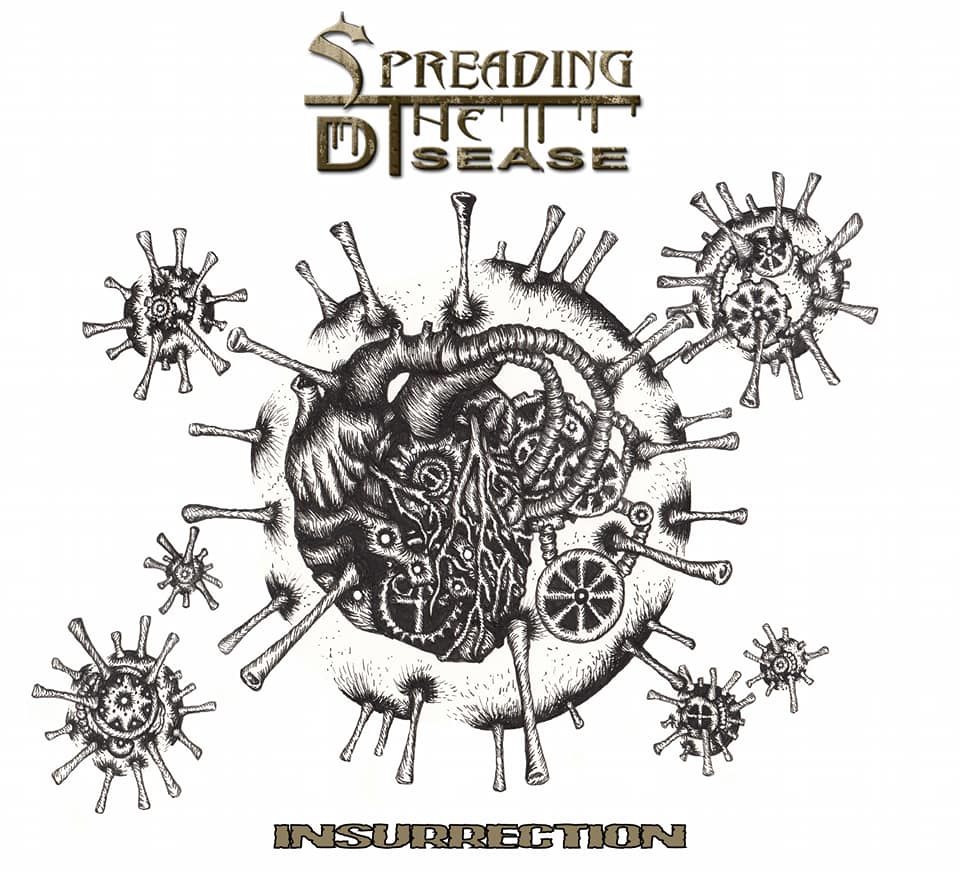 What immediately stands out are the vocals.  The scream vocal is strong and well-delivered, however, what is more obvious, are the tone and production.  With metal bands, especially contemporary ones, when deciding on the balance between depth and clarity, the majority tend to side with the extra power achieved by giving the vocal real low down grunt.  But, this masks the delivery, making the lyrical content difficult to extricate. However, Spreading The Disease have clearly decided that the importance of clarity of diction takes precedence.  This makes complete sense, as it allows the power of the mostly politically-motivated message to be positively delivered.  Let me also add that there is no lack of depth or power as a result, in fact it gives more room for the exceptionally chunky bass and frequent tom and double kick work on the drums.  It is refreshing to hear the bass part so clearly, especially as the tone is particularly delightful.

The clean vocals are noticeably weaker than the scream vocal and, maybe as a result, are often heard with the inclusion of backing vocals.  This creates an interesting dynamic within the songs, with the sung sections feeling a little eerie.

Without meaning to sound too harsh, the opening to the album was a little disappointing.  The build at the start of first track Find My Path just didn’t seem to hit the spot.  Perhaps it wasn’t as tight as expected or just didn’t gel or merge correctly, however, the track did improve once it got going.

Perhaps it was a late addition, as the second track, Words Unspoken, has a much more satisfying opening and would perhaps have made a more suitable opening track to the album.  The rock n roll riffs in the guitars are especially enjoyable. There is also a fast technical guitar solo which is sure to satisfy keen guitarists everywhere.

The first sign of creative production comes in third track Dischord.  The intro and outro have imaginative use of ritualistic chanting, dark choral parts and haunting bells and chimes.  This leads to a much more satisfying build than in the opening track. The guitar parts in the verse once again drive the song brilliantly and the call and response nature of the chorus is sure to be a favourite for crowd interaction when performing live.

The tracks Spreading the Disease and Greed are the clear “singles” of the album.  They are the easiest to pick up and immediately enjoy, especially Spreading the Disease.  The first single, along with video release, though, was Greed.  It contains a break with a great bass solo section, which really showcases the quality of the bass part.

Another highlight is the track Whores of War.  While the name itself would make it a highlight, it perhaps is the best composed track on the album.  Each part is really well written and the chorus is especially memorable. At 6:39 it is the longest track on the album which also allows for a very creative middle section with use of a “war broadcast message” and appropriate sound effects.

With most of the tracks very hard hitting, the only real contrast comes with the ballad Can’t Let Go.  The combination of the clean vocal and a guest female vocal makes for very haunting verses, with the backing very sparse with predominantly acoustic guitars.  The track is crying out for a kickass guitar solo and sure enough one arrives. It is easily the most tuneful and beautiful of the whole album with great tones.  One observation I would make though, is that the guitar seems to sit in the mix rather than cut through. Perhaps a little more treble would raise it an extra level.

Overall, Insurrection is an album that Spreading The Disease should be very proud of.  The lyrical content and desire to deliver it distinctly are both admirable and successful.  The space created to allow all instruments to be prominent makes the album all the more enjoyable.  Though some tracks don’t quite deliver, the majority are very well-composed and some sections display real creativity and brilliance.