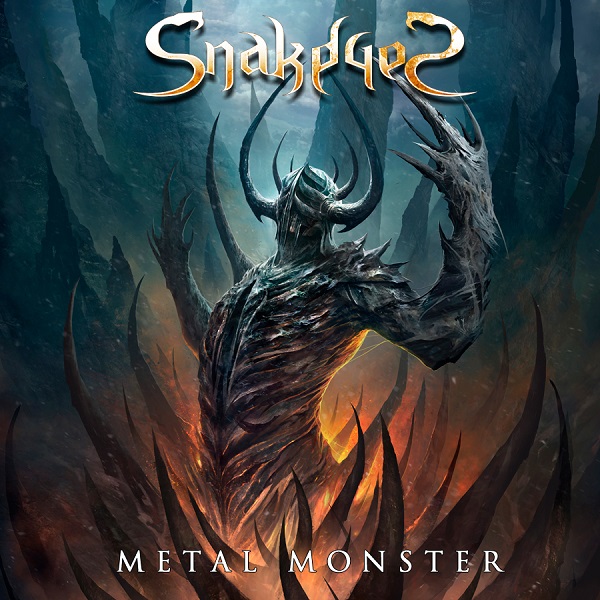 There are two ways you can interpret a title such as ‘Metal Monster’. The band are either wallowing in insecurity and need to clarify that yes, you have picked up a metal album, before you have even listened to the first track, or, they want to loudly and proudly announce to the world who they are. I am inclined to think the latter as this is the second time SnakeyeS have self-produced and distributed a full-length feast of unapologetically heavy metal songs. Insecure they are not.

On paper, SnakeyeS have everything that a classic metal album should have. Vocalist Cosmin Aionita delivers a performance that will excite fans of Tim ‘Ripper’ Owns and Rob Halford. This is perhaps best demonstrated on title track Metal Monster, where he utilises an impressive range that, unfortunately, is only really hinted at for the rest of the album. There is no shortage of power metal singers who can cleanly belt out a high note so Aionita does well to stand out, adding a touch of rasp to his voice that takes him out of clean and untainted power metal territory into the realms of down and dirty heavy metal. Normally this would be enough for any band to work with, but not SnakeyeS, who decide to enhance the vocal track by adding the roar of a Tyrannosaurus-Rex to the final seconds of Evolution. It might work for Jurassic Park but here it is a slightly tacky addition to what is otherwise one of the strongest songs on the album, with a riff and chorus that you long to return to.

Another archetype of this genre is delivered in spades by guitarists Jose Pineda and Justi Bala. Twin lead guitar riffs straight from the Iron Maiden & Helloween rulebook are present throughout the album, although the best is saved for last with closing track Rise Up (The Red Plague). It is a shame that this is the final song as, at just over eight minutes long, it is an epic about revolution that demonstrates some of the best guitar work SnakeyeS have on offer. This does not detract from the rest of the songs available. Apart from the opening number Into The Unknown, every track is a strong performance, but half an hour in and they all begin to blend into one, with very little to differentiate between the guitar work on each song. This is not helped by the rhythm section, where the reluctance to give the double kick drum a rest does little to help each song gain its own individuality and adds to the lack of dynamic range being demonstrated. Rise Up (The Red Plague) stands out all the more for being the one song that shows some musical diversity while still remaining thematically in touch with the overall sound SnakeyeS are going for. The fact that it is an excellent song and shows off the best of all the band members makes it the jewel of the album.

There is nothing particularly ground-breaking or original about this offering from Snakeyes, but they do take an already established and loved formula and put their own mark on it, delivering a set of songs full of powerful choruses and air-guitar worthy melodies that stand out from the crowd. This is not a record where you will discover something new each time you listen to it, but then again that is not the point. Brash and unrelenting, this album really is a metal monster.

Highlights: Evolution, Metal Monster and Rise Up (The Red Plague)