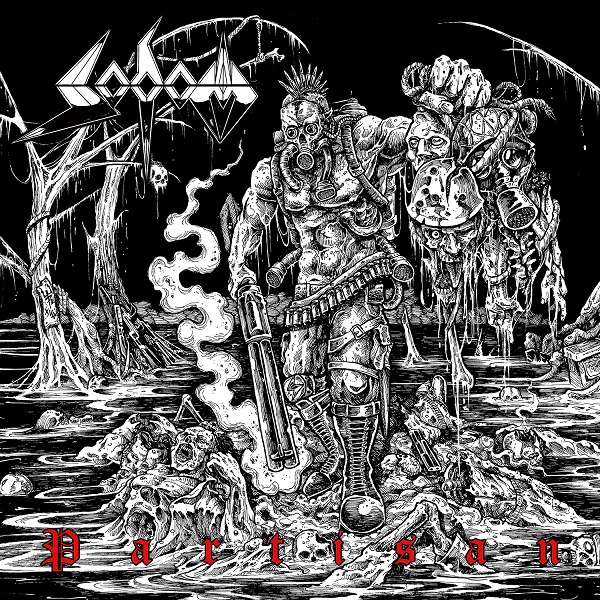 With their 40 year anniversary not too far off, long running thrash giants Sodom are showing no signs of slowing down. During that time, the band has traversed down various different paths within the confines of thrash metal. Mainman Tom Angelripper is clearly not averse to risk, and following the great reception to 2016’s Decision Day, he has decided to take another by splintering the band line-up that had produced three strong records since 2011. Onkel Tom felt it was time for some (mostly) new blood to shake things up once again, and with the re-introduction of Frank ‘Blackfire’ Gosdzik and the addition of experienced hands in Yorck Segatz and Stefan Hüskens, Sodom have relinquished their power trio status as they move forward.

Partisan serves the same purpose as Sacred Warpath did before Decision Day. It’s designed to give us a little taste of what we can expect from their forthcoming album (tentatively due early next year), and if the full length is as good as the two studio offerings here, there’s a chance we’ll have another cracking record from Sodom in 2019. Perhaps it’s once again hearing Blackfire pepper his solos with flair and panache, or the booming reverb of the tom rolls, but there’s a distinctive, old school flavour to both tracks that can’t help but make you smile. The title track is built around a probing, mid paced riff, whilst the swifter “Conflagration” sees punk and thrash linked by a slower bridge that’ll doubtless have heads banging. Each song plays up to a different part of Sodom’s creative make up and, with a new album on the horizon, the fact they’ve done both approach so well stands them in good stead.

As an added bonus, a live version of “Tired & Red” (and “One Step Over the Line” if you’re going digital) from this year’s appearance at Rock Hard Festival is included as a third track. From what I understand, this show was one of the first the new line-up played together, and there is a noticeable lack of chemistry and cohesion between the players. There can be a certain charm to sloppiness if the source material has that viciousness to it, but in this case, the studio originals are devastating in its cold, ruthless precision, and losing that lessens the impact of the song. The faster parts suffer the most, and whilst they just about hold it together, it’s evident that Sodom still have a few creases and kinks to iron out before their studio rapport transfers to the stage.

I’m sure there will be many Sodom fans who were disappointed by the departure of Bernd Kost and Markus Freiwald; conversely, I’m certain just as many were delighted that Blackfire was one of the recent introductions to the roster. I’d definitely place myself in the latter camp, as the thought of Blackfire’s exquisite leads once again gracing Sodom’s music made the next record a must hear. The studio work on Partisan shows that this line up won’t require a period of acclimatisation and should be able to get off to a flying start with the forthcoming LP. The live track doesn’t fare as well, and may be a bone of contention with those who had grown accustomed to the solid work done by Kost and Freiwald in their tenures. This is something that Sodom can momentarily put on the backburner though, as the focus for now will be on the album. I’m sure by the time a new tour rolls around, the group will be suitably primed and ready to roll. If they’re armed with new material up to the standard of Partisan, then there shouldn’t be a problem.

Find out more on Sodom here:

Partisan is available on November 23rd via SPV / Steamhammer, and can be purchased here.