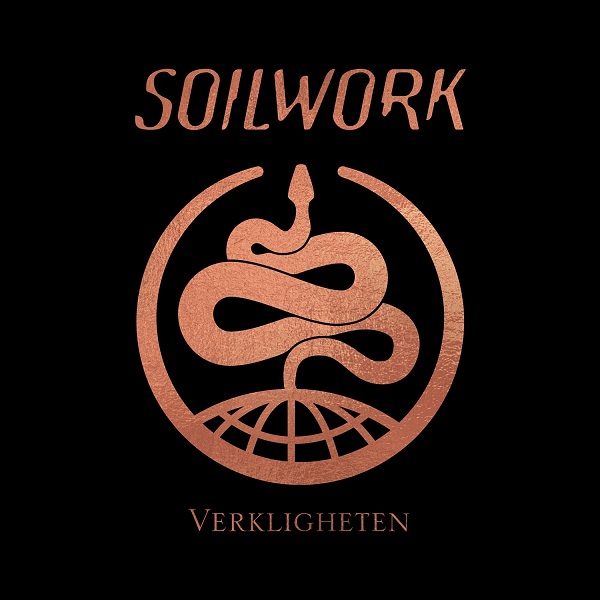 For many years, I thought of Soilwork as the lesser of the top tier Swedish melodeath groups from the burgeoning scene in the ‘90s. They struck me as a jack of all trades and master of none, lacking the intensity of At the Gates, the sophistication of Dark Tranquillity and the downright catchiness of In Flames and Arch Enemy. Fast forward 15 odd years and they are now at the head of the pack, with In Flames deep in alt rock territory, Dark Tranquillity and Arch Enemy languishing in a rut and At the Gates struggling to recapture the magic that preceded their mid ‘90s dissipation. Not that Soilwork haven’t had their share of ups and downs, but since 2010’s The Panic Broadcast, they have been on a winning streak, which they’re looking to continue with Verkligheten.

This album is our studio introduction to new drummer Bastian Thusgaard, who replaces Dirk Verbeuren, now of thrash legends Megadeth. He has a lot to live up to, but impresses with an eclectic shift that ranges from blast beats to shuffling pop rhythms, providing a solid foundation on which the rest of the band can build. Björn ‘Speed’ Strid is another stand out performer, particularly when he uses his clean voice. He’s already proven he’s a very capable singer, but he sounds more confident and assured than ever, likely spurred on by the positive reception he’s received for his role in the Night Flight Orchestra (NFO) project.

The brief titular introduction utilises what sounds like slide guitar patterns and gears us up for the furious melodic death of “Arrival”. This lets us know that yes, the band has indeed arrived, and the Swedes show that they can still ramp up the intensity when the mood suits. There is still a sliver of accessibility to the track mind, which tends to be true of “Needles and Kin” and “When the Universe Spoke” as well, two other songs that fit into this manic, melodeath template. Elsewhere, the likes of “Bleeder Despoiler” and “The Wolves Are Back in Town” opt for groovier riff sets that are more akin to their mid ‘00s excursions, whereas “Full Moon Shoals”, “The Nurturing Glance” and “Witan” are rooted in traditional, fist pumping heavy metal. Spring-loaded riffs and harmonies bounce off one another in the euphoric blast of “The Ageless Whisper”, whilst there’s a brooding, ‘80s-pop-gone-metal vibe to “Ståfågel” and “You Aquiver”. The latter two tracks see the influence of NFO bleed heavily into the Soilwork sound but, truth be told, the influence isn’t limited to this duo, as the entire album is littered with catchy hooks and memorable choruses. This isn’t exactly groundbreaking for Soilwork, but these features are more pronounced and prominent than ever before, and make for a pleasant listening experience.

Soilwork have come a long way in the 20+ years since their debut, and Verkligheten sees them continue to push beyond the boundaries of their genre. The album is a rich and diverse affair, and whilst it shoots off in various different directions, it never loses sight of the core characteristics that group was founded on. One of the strongest albums of their career, Verkligheten ensures that 2019 gets off to a great start.

Find out more on Soilwork here:

Verkligheten is available on January 11th via Nuclear Blast Records, and can be purchased here.