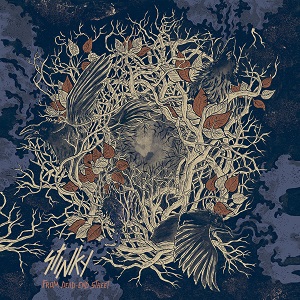 Hardcore, despite being considered a restrictive genre, can mean a lot of different things, from the punky attack of Frank Carter &The Rattlesnakes to the sludgy barrage of Code Orange. So, what do I mean when I say Stinky are a hardcore band? They cover two different approaches to hardcore on their second full album, From Dead End Street. Whether it’s their Gnarwolves-esque take on melodic hardcore or the Slayer worship present in a lot of post-millennium hardcore, it’s pulled off well throughout.

One of the major drawbacks of this record is the vocal approach. I feel that the high, screechy vocals may not to be everyone’s tastes, however I like the way they sound. The key issue I take is that there’s not a lot of melodic variance. This means that it’s hard for the band to create vocal hooks essential to the kind of melodic hardcore they’re pedalling, such as on the album opener Sliders.  I’m not even asking for a fully clean vocal at points, as bands like Hatebreed and Lamb of God can pull off huge hooks without breaking from harsher vocals. The lack of clear hooks on the rest of the album is exacerbated by the inclusion of a guest vocalist on No Recovery, who brings a more melodic vocal in for a huge hook. This creates an album highlight, with a style that brings to mind Sam Carter of Architects. Another way Stinky have overcome the issue of lacking hooks is by using gang vocals to huge effect such as on Unanswered, however they don’t come in nearly often enough throughout the rest of the album. It is also confusing that clean singing is never used for lead vocals, as there is a very nice melodic backing vocal following the lead during sections of Otherside that could have been used to great effect as a lead vocal line in other more melodic songs.

Stinky also have a strange anomaly of a song; the mid-tempo Nausea which sounds like the band are playing slightly slower than they should be. It feels as though the drums are playing a little behind the beat which saps the energy out of the song. On a highly energetic hardcore album like this it is bizarre and this marks a significant low point on such a good album. This is especially true when compared to the slower ending of Rise After Fall. This shows that this band can do slower sections very well indeed, which begs the question what happened to Nausea?

On a more positive note Stinky may not push the boundaries of song writing in hardcore with their music, but they know to keep things short and to the point. Keeping the songs short is in no way a bad thing. Only two songs are over three minutes. This prevents them from becoming stale in their relatively basic musical canvas. This shows self-awareness and the ability to craft excellent, short, raw blasts of energy, and the songs don’t need to be overly technical or expansive to get the point across. I think the songs probably would have suffered for being longer. This approach shows a band who know their own limits and know when to say that enough is enough. Keeping the total run time at around twenty-seven minutes is a master stroke that keeps the album from becoming stale.

In short Stinky have released an excellent hardcore album that is marred with some relatively small issues. However, when they keep the energy high, Stinky make you feel like you can headbutt through a brick wall, which is a benchmark for quality for any hardcore album. This album may not be the best album you hear this year but it holds enough potential and promise for future releases. This would be particularly successful if they meld their more melodic approach with their more out right savagery into a cohesive whole rather than switching between the two. I recommend you get this album and keep an eye on this band, they could go on to even greater heights.

From Dead End Street is available now for purchase on Bandcamp