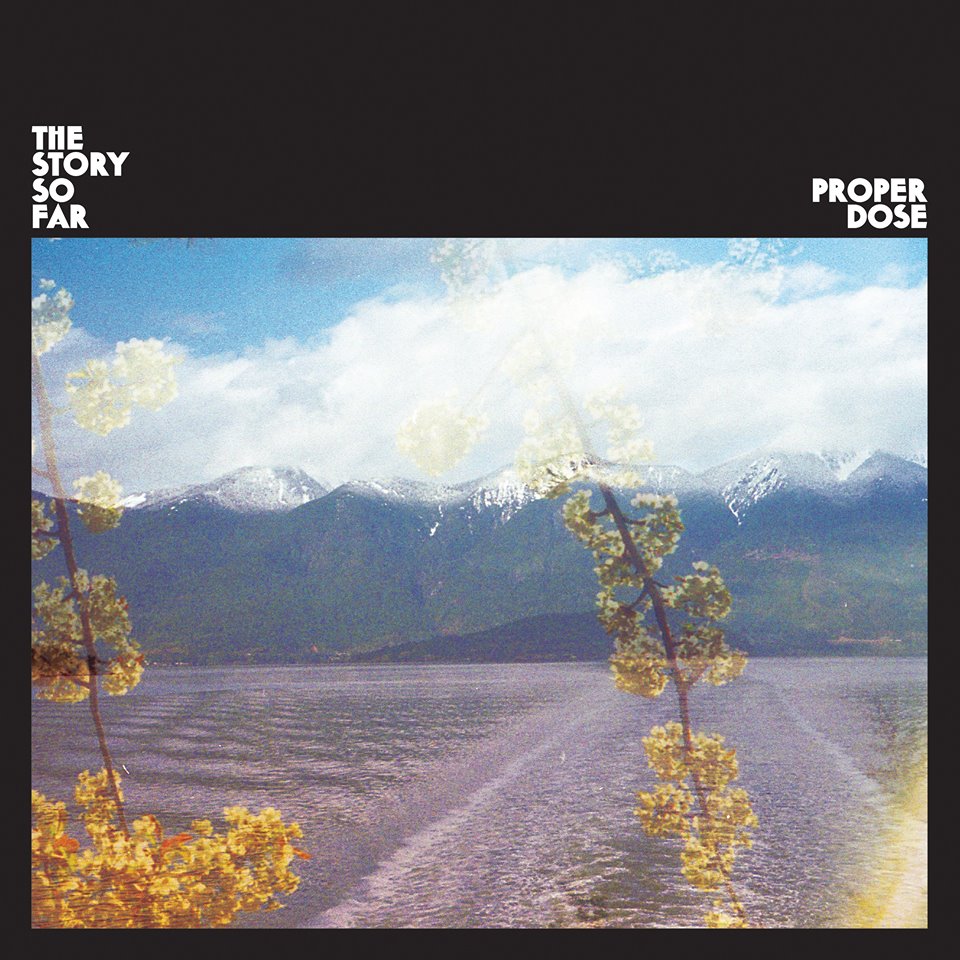 The Story So Far have finally released Proper Dose, an album which already had an iconic status before it was even heard. I’ve been a fan of the band since Under Soil and Dirt and have consistently liked each album better than the last. As unusual as that is, I can name very few bands who have progressed and matured as impressively as The Story So Far have. Their albums have aligned with my experiences, almost curiously so, and I’ve become more captivated by them each time they’ve put out new music. Their last self titled release is now one of my favourite albums of all time but felt worryingly like a peak for the band, I struggled to see where they could go from the metaphorical mic drop that shook fans three years ago. In addition to that, the band and their label, Pure Noise Records, have been teasing Proper Dose for over a year, so a lot of anticipation has been built up. Despite the age of immediacy that we now live in, the drawn out timeline has been as intoxicating as it has been infuriating and being able to listen to the full album has been a genuinely special experience. I would be relieved to say that Proper Dose was everything that I had hoped for but it’s so much more than that. I’m completely blown away by it.

The first single ‘Out Of It’ was released in September 2017 with little explanation. It was well received but fans were still unsure about future plans for the band, were they about to drop a new album? How long was left to wait? Which direction would they head in? People clung to the lyric “I can’t believe you’re still upset, get over it and leave me alone” and became comfortable with the idea that The Story So Far would remain an angsty band that they could angrily shout along to in their cars. Fast forward a year and we now have a different mix of ‘Out Of It’ and ten other tracks to piece together and understand the band through. The assumptions that people have been making for the past year now seem futile, Proper Dose is as much of a nod to the past as it is a forge into the future and touches on a wider range of topics than anything they’ve done before. Following the interview that lead singer Parker Cannon recently did with Kerrang, it is now apparent that the preceding lyric “my appropriate opiate has me out of it” was actually far more relevant in terms of this album. In his first major interview in five years, Parker revealed some intimate details about how he’d spent time living as a disconnected recluse and using substances to try and feel something again.

Of course, as more singles were released, people were naturally looking out for lyrics about the relationship that Parker has based so much of his writing on thus far. The Story So Far had become a band that anyone who had been through a toxic relationship could relate to and use as a crutch. ‘Let it Go’, which was released next, is about just that, letting that relationship go. It seemed apparent that this album was going to remain consistent with the theme that the band had become so well known for. Except there’s something different about ‘Let it Go’, the grief has disappeared from Parker’s voice and the lyrics feel more final. The soft and dreamy “na na na” which introduces the song encapsulates the new perspective that he has been writing from, which made the song an excellent choice for a single. As if an entire fan base had finally let go of their sorrow at the same time, there seemed to be a synchronised sigh of relief when ‘Let it Go’ was released, it meant that the band had grown but were still relatable.

Then came ‘Upside Down’, a single which confirmed that the band were approaching their music from a different perspective but that it was still relatable, loveable and intelligently crafted. It was released alongside the acoustic-led ‘Take Me As You Please’ and the two showcased the softer, mellower side of Proper Dose beautifully. It was now apparent that the grief stricken, angry band that the pop punk scene had held in such high regard had moved on and decided to explore their art with a new outlook. It was an obvious risk to stray from the comfortable, winning formula that had brought them such success, but there is something to be said for artists who are willing to do that. It’s paid off enormously with Proper Dose. Whilst venturing down a new avenue, The Story So Far have retained everything that made them so engaging in previous years. Not only that, Proper Dose gives the bands previous albums a new context, a calm but sad hindsight.

‘Upside Down’ is a song which becomes more impressive upon each listen; despite its simple, soothing sound, so much is packed into the 3 minutes and 51 seconds that it takes a while to understand its layers. The lyrics are exceptional and bring to life everything that Parker discussed with Kerrang, and everything that fans had wondered about this album: his uncertainties about the future of the band (whist being exactly that), his past relationship and his reluctance to discuss it (whilst discussing it), and how it feels to let go and move on. The song exists through each of those dimensions, they are intricately connected and delicately balanced and culminate into one of the most moving songs I’ve ever heard. ‘Upside Down’ renders all of the analysis useless, music is beautiful when it’s from the heart and that’s exactly what this is.

The video, which was released on the same day as the album, is a visual representation of everything that I understood the song to be. For the first time, the pop punk aesthetic has been completely stripped away from the band. Parker’s tattoos are covered with a long sleeved, beige shirt; the video opens with the sunlight breaking through the trees and the band perform against a gentle, pale colour palette. You can physically see that Parker’s demons have been lifted. This is made even more meaningful when analysed alongside the Kerrang interview, during which Parker stated “I didn’t want to be pigeonholed as Mr. Pop Punk”, there has been a clear diversion from their previous work but their authenticity has not faltered, and that’s why Proper Dose works so wonderfully. A dramatic reinvention which purposely tried to break loose from their roots could never have had the level of genuinity that Proper Dose has. During the interview, Parker also explained “we’re trying to grow and become a real band” but they were always a real band writing about their real experiences, and this has been no exception.

The album opens up with title track ‘Proper Dose’ and after 4 seconds of nervousness, listeners are catapulted into the exciting, enriching world of The Story So Far with the expressive drum work of Ryan Torf. Alongside ‘Keep This Up’, ‘If I Fall’, and ‘Need To Know’, ‘Proper Dose’ is fast paced, anthemic and reminiscent of the sound that made The Story So Far so popular in previous years. Though it’s still worth noting that the sounds are fuller and more dynamic than they have been previously, and the vocals still feel void of the anger and pain that the band had been a channel for. Interestingly, the mix of ‘Out Of It’ which features on the album is slightly calmer and more melodic than the original version from a year ago, which now feels like a very clever way to have eased fans into this album.

‘Line’ is to ‘Proper Dose’ what ‘Phantom’ was to ‘The Story So Far’, something of an atmospheric, extended interlude. It has very few lyrics but those that it does have are beautiful and heartbreaking at the same time. ‘Growing on You’ is the softest, most angelic song in the entire discography of the band. It explores the higher range of Parker’s vocals and is sung sweetly alongside slow, chilled out instrumentation. The poetic chorus is left open to interpretation though it feels like an emblem of what Parker had been through during the gap between albums.

Closing with ‘Light Year’, the album shuts down in the most heartbreakingly beautiful way. This song is what growing up, letting go and moving on feels like and ties everything that has gone before it together perfectly. The tempo picks back up and reinstates the positive energy that now surrounds the band. The lyrics finalise everything that was said with the other songs in a more blatant way “I’m stepping outside now, I’ll leave you behind now, I finally came down, I’m ready to let it all out” and listeners are left completely inspired. Proper Dose is an album about balance and it achieves it in so many ways. Like a tightrope walker, it has all of the skill but also the beauty, elegance and allure and that’s why it will be remembered.

Proper Dose was the most perfect progression for The Story So Far that it could have been. As a band, and indeed as individuals, they have clearly found their balance and entered the next volume of their narrative maturely, creatively and successfully. Proper Dose is extremely powerful in the context of the band but stands alone just as strongly, and although I don’t think the term “real band” is appropriate because they always were one, they certainly have a more universal appeal now. It needs no frame of reference to be able to enjoy it, the hard work that’s gone into this music is evident and there’s not a second of it that doesn’t mean something. It didn’t need contemplating; this album is Parker baring his soul and it would be hard to not be utterly moved by it.

This album is nothing short of a masterpiece. It’s intricately layered; it has depth undoubtedly even further beyond that that I’ve grasped; it’s nostalgic and futuristic at the same time; it shows raw vulnerability but screams resilience; it’s open, honest, and absolutely beautiful. This album is every single thing that’s wonderful about music and I couldn’t be more impressed with it.

Highlights: Every track, it would contradict this review if I could choose.

Find The Story So Far here: